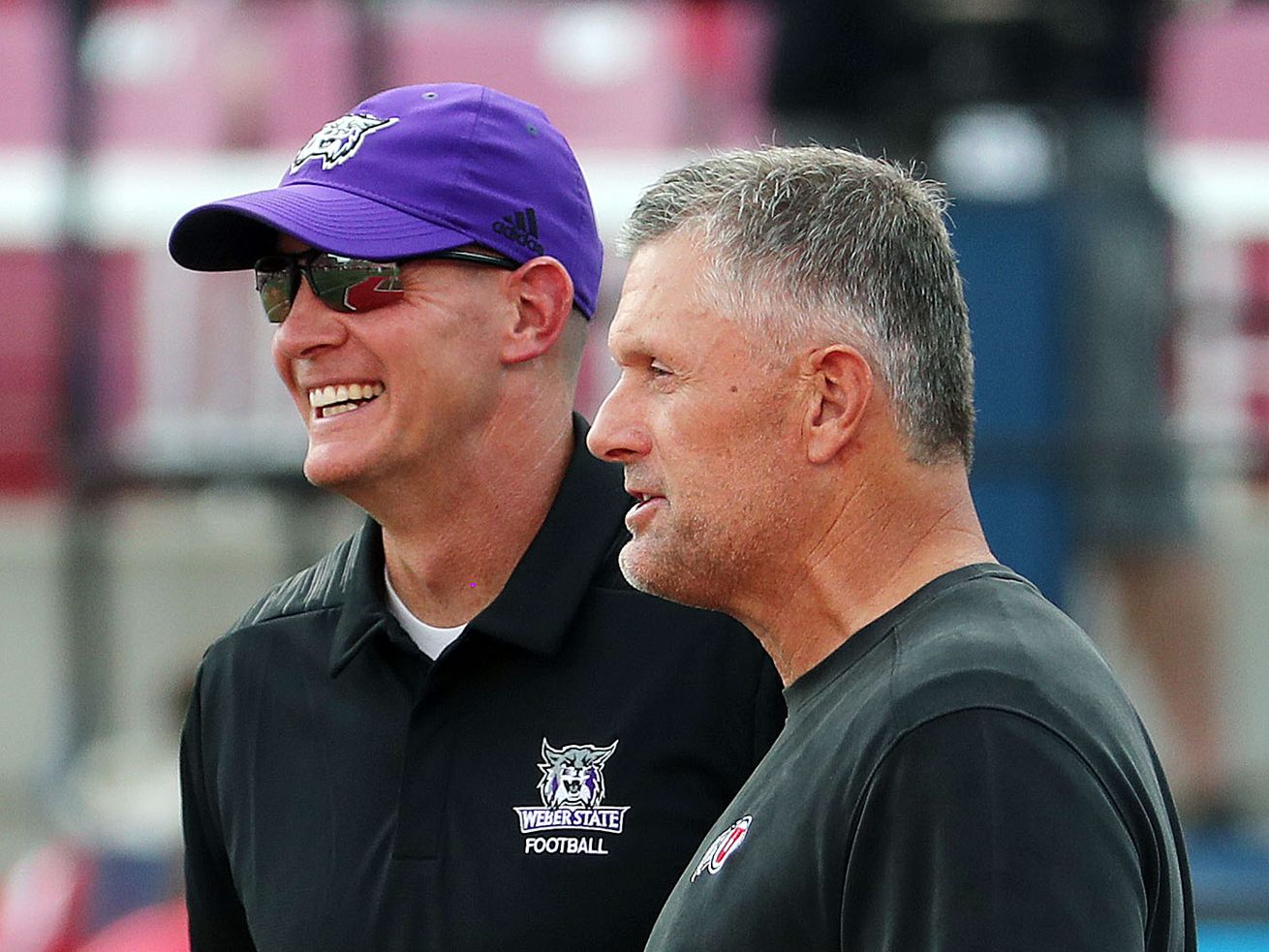 Jay Hill and other staff have ties to the program

SALT LAKE CITY — A lot of folks in red will be rooting for the guys in purple Saturday.

Former Utah player and assistant Jay Hill, who is in his sixth season at the helm of Weber State, guides the Wildcats into the FCS semifinals against James Madison (4:30 p.m., ESPNU). The winner advances to the national championship against North Dakota State or Montana State.

Weber State has never advanced this far. The Wildcats made it to the final four with a 17-10 victory over Montana eight days ago in Ogden.

Utah coach Kyle Whittingham was among those tuning into the broadcast.

“Good for Jay Hill. What a great defensive effort, five turnovers and a blocked punt. So that’s the equivalent of six takeaways — a plan to win,” he said. “Play great defense is what he did, and they did a nice job.”

Whittingham added that the Wildcats are winning a lot of games, obviously.

Utah linebackers coach Colton Swan knows Weber State well. He played and coached for the Wildcats, doing the latter from 2004-18 while earning both a bachelor’s and master’s degree at the school in Ogden.

Swan, who is completing his first season at Utah, is excited about what is going on at his alma mater.

“They’re having a heck of a year. I’ve been able to slip down and watch a game and it was impressive,” he said. “It was a nice win versus Montana in the weather so I’m super, super proud of all the kids and the coaches. They’re doing a great job.”

Swan transitioned into coaching as soon as his playing career ended in 2003. Because of his lengthy tenure, he knows Weber State well — the administration, the school, the teachers, the faculty, as well as the community.

“You get pretty invested being there for that long,” Swan said. “So, yeah, the transition’s a little bit difficult for sure.”

Weber State’s climb to national contention has been a process. The Wildcats, though, have climbed to the upper echelon in recent seasons. They’ve won three straight Big Sky Conference championships.

“It comes down to obviously recruiting. They’ve done a great job and I like to go back because a lot of those kids that are playing now are guys that I’ve recruited and have very close relationships with their families. And so that’s a big part of it,” Swan said. “But from when Jay got there to where it’s at now, it has made a huge jump.”

It’s the next leap, he added, that the Wildcats are poised to make.

“Get into the championship game and we’ll see what happens,” Swan said. “It’s a huge improvement over the six years Jay has been there.”

Swan vows he’ll be glued to the game watching the Wildcats. He considers himself fortunate to have worked with …read more

Mark May Gives Score Prediction For Ohio State vs. Clemson