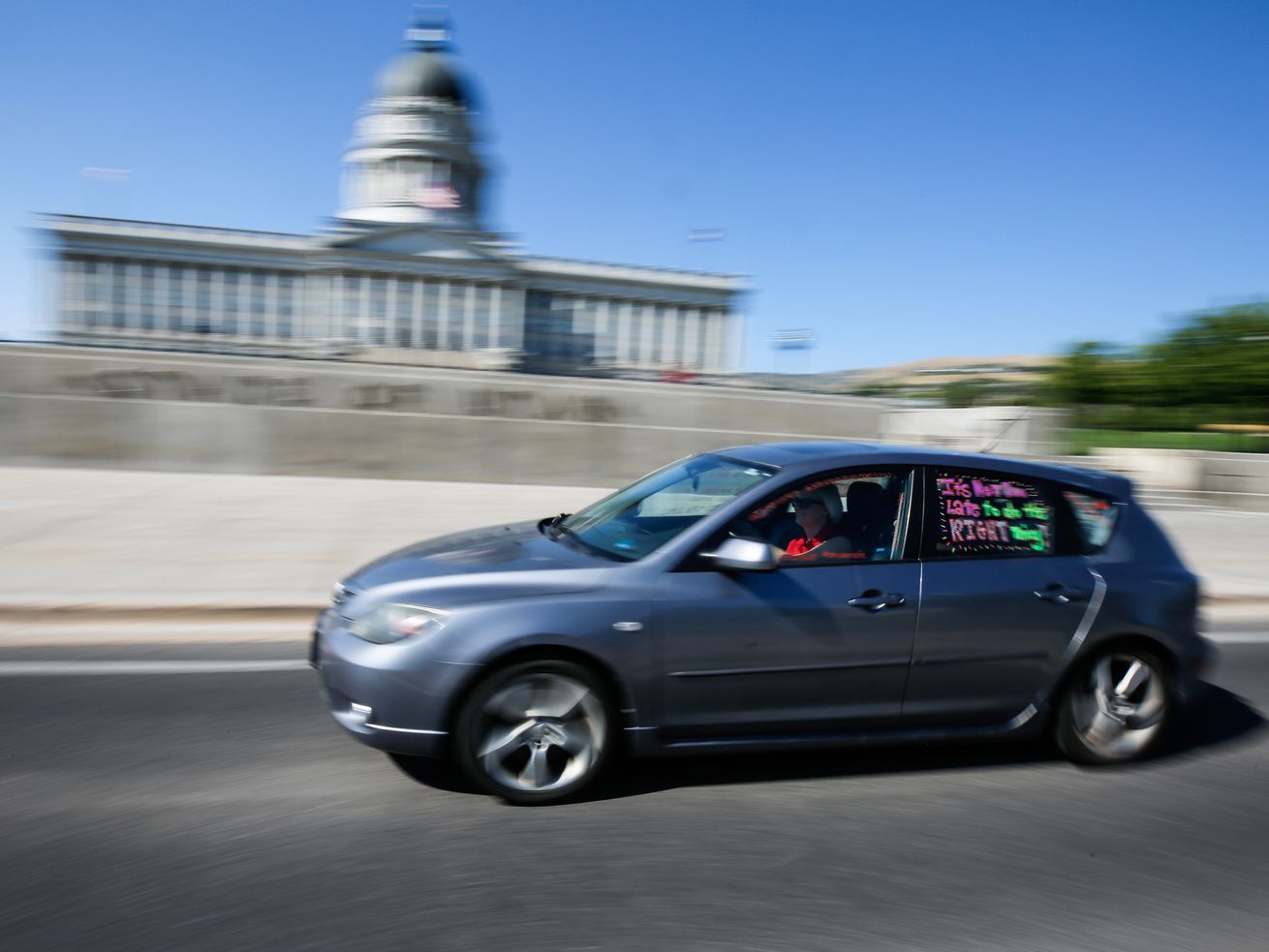 A car painted with slogans drives past the Capitol during a caravan-style rally to show support for opening schools safely in Salt Lake City on Friday, Aug. 7, 2020. | Yukai Peng, Deseret News

With chants of “We love science” and “It’s not too late,” the group called for greater oversight from health officials and a half-capacity attendance cap in communities with positive test rates over 5%. They also emphasized a need for better communication with families, especially those whose primary languages are not English.

Under pressure from the union and others, state health and education officials Thursday changed course and issued new guidance directing students and teachers to stay home for two weeks after exposure to the virus, not just when they have symptoms.

Speakers at Friday’s rally called the state’s approach too lax and said it disregards the very science and critical thinking it requires students to learn.

Brian Moench with Utah Physicians for a Healthy Environment denounced claims that children can’t get sick, noting a 7-year-old boy in Georgia is the latest child confirmed to die of the virus.

“Teachers have endured criticism, bitterness and bullying for simply not wanting to sacrifice their lives and those of their students on the altar of political expediency,” Moench said, addressing the group remotely over a phone. “If our schools are not safe, none of us are safe.”

Ana Alcala said schools on the west side of the Salt Lake Valley have largely failed to release reopening plans in Spanish even as Utah’s Hispanic community has been hardest hit by the virus.

“We need to keep the Latinx community in mind,” she told the Deseret News.

Two dozen of the state’s 41 districts are allowing students to return full time. Just one, Salt Lake City, is keeping its doors closed and beginning the year teaching fully online. The remainder are holding a mix of in-person and remote lessons.

No family is required to send a child to school. The state has allowed them to opt for remote lessons if they don’t feel comfortable.

The Utah Board of Education is allowing districts wide latitude in crafting reopening plans, but masks are required. The board on Thursday rejected a series of stronger statewide standards, including limits on in-person attendance when positive test rates top 5%, the threshold set by the World Health Organization.

Supporters said the tweaks would help prevent outbreaks that would force a total shutdown. Opponents said they did not allow enough flexibility for schools to craft their own plans based on local needs.