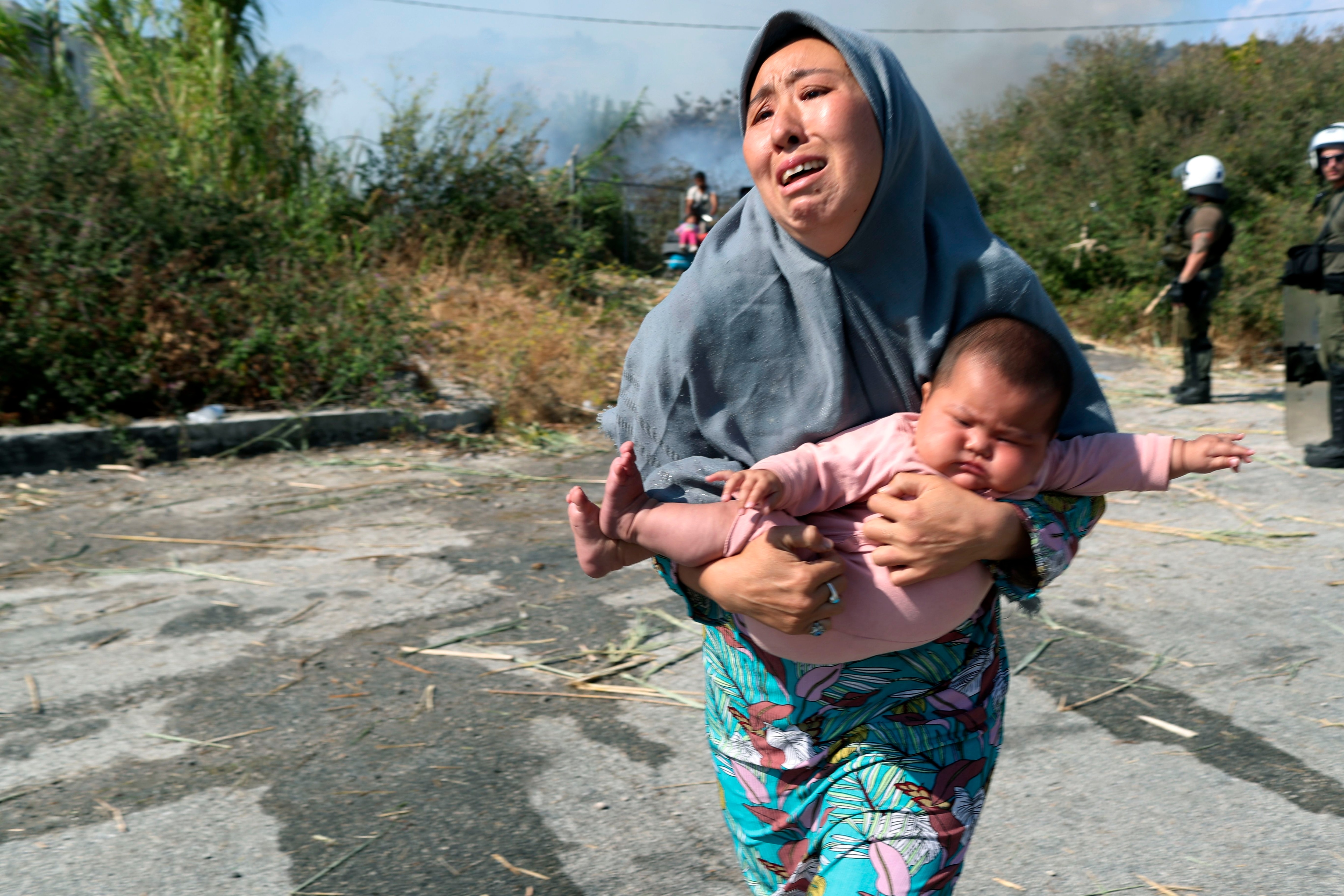 Thousands of asylum-seekers have spent a fourth night sleeping in the open on the Greek island of Lesbos, after successive fires destroyed a notoriously overcrowded migrant and refugee camp during a coronavirus lockdown.

Officials have said the Tuesday and Wednesday night blazes were deliberately set by some camp residents angered at quarantine and isolation orders imposed after 35 people in the Moria camp tested positive for COVID-19.

With the camp gutted, Saturday morning found men, women and children sleeping under improvised shelters made of reed stalks, blankets and salvaged tents.

Thousands gathered for a protest demanding to be allowed to leave the island, gathering on a road blocked by police buses. The demonstration was loud but peaceful, with mainly children and women at the front. Riot police observed nearby as protesters chanted slogans and held up improvised banners made of pieces of cardboard or sheets.

“We need peace & freedom. Moria kills all lives,” read one.

A few of the demonstrators wore masks in the tightly packed crowd of people who recently had lived in the camp, which had dozens of confirmed coronavirus cases before it burned down.

Leaving the island would require a bending of European Union rules, under which asylum-seekers reaching Greece’s islands from Turkey must stay there until they are either granted refugee status or deported back to Turkey.

The Moria camp was built to house around 2,750 people but was so overcrowded that this week’s fires left more than 12,000 in need of emergency shelter on Lesbos. The camp had long been held up by critics as a symbol of Europe’s failings in migration policy.

Moria was put under a virus lockdown until mid-September after the first case confirmed there was identified in a Somali man who had been granted asylum and left for Athens but later returned to the camp.

On Friday, 200,000 rapid-detection kits for the virus were flown to the island for an extensive testing drive that would include asylum-seekers and islanders.

The World Health Organization said Greece had asked for the deployment of an emergency medical team. Two such teams, one from Belgium and one from Norway, were expected to arrive on Saturday and Monday.

Authorities have said none of the camp’s residents — except for 406 unaccompanied teenagers and children — would be allowed to leave the island. The unaccompanied minors were flown to the Greek mainland on Wednesday, and several European countries have said they will take some of them in.

Other countries have pledged assistance for a new camp to be built on Lesbos, a move neither local residents nor the former inhabitants of Moria want.

Austrian Chancellor Sebastian Kurz, whose country has so far not offered to take in children from Moria, underlined his long-time hard line on migration in a video posted on Facebook Saturday.

“Now, some migrants have set alight and destroyed the Moria refugee camp on Lesbos to create pressure so that they can get from Lesbos to the European mainland,” Kurz said. “And if we give way to this pressure, we …read more

Uber’s CEO took a shot at labor groups, accusing them of being driven by ‘politics’ in the massive fight over drivers’ employment status (UBER, LYFT)