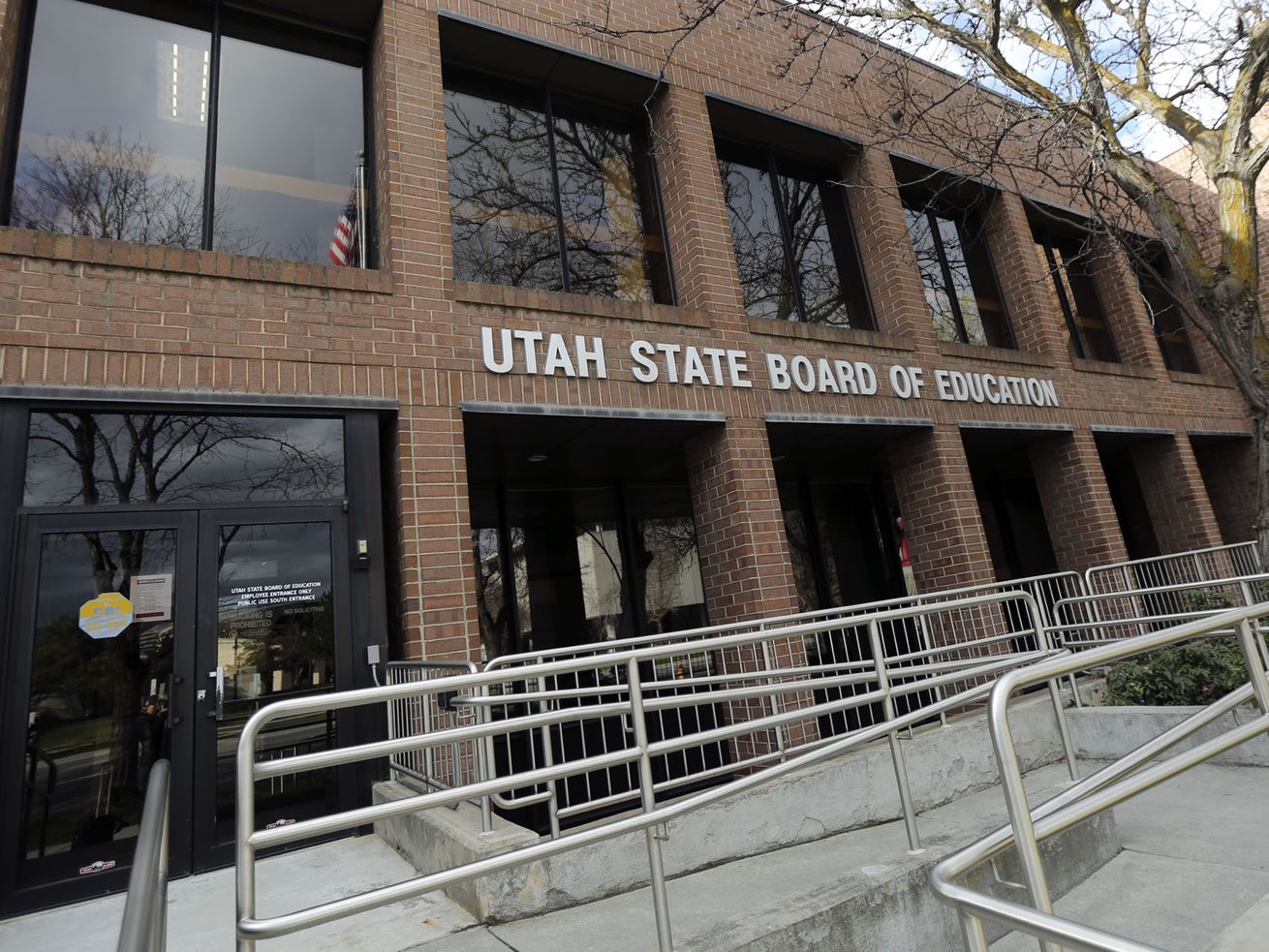 The Utah State Board of Education building in Salt Lake City is pictured on Tuesday, March 31, 2020. | Kristin Murphy, Deseret News

But education and health leaders say students, teachers should stay away for 2 weeks after exposure, not just if they have symptoms

SALT LAKE CITY — The Utah State Board of Education on Thursday rejected several proposals requiring schools to take greater precautions against the coronavirus, including two that would limit the number of students in a classroom if the positive test rate in a community tops 5%.

The board voted 9-5 against mandates for students to have at least 30 square feet to themselves — or 20 square feet with a plexiglass barrier — if community spread spikes above the 5% reopening threshold set by the World Health Organization.

A series of other tweaks failed in the marathon meeting amid concerns from a majority of board members who said they feared the changes would take away power from individual school districts and place too heavy a burden on schools already scrambling to adapt.

But the board did move to require districts to draw plans and protocols for how they will respond in the event of an outbreak. The panel adjourned its daylong meeting Thursday about 11 p.m.

The changes come just weeks before the state’s 667,000 schoolchildren return to classrooms, online learning or a blend of the two. Teachers at recent demonstrations and at the board meeting earlier in the day called for greater preventive measures.

The state is allowing each school district to decide how to balance the intellectual and social development of its students against the public health risks, directing schools to allow for social distancing when possible.

Democrats in Pa. scramble to limit number of 'naked ballots'

Proponents of the stricter moves said they would help ensure students and employees can stay safe and avoid bringing the virus back home to parents or grandparents.

Board member Scott Hansen, who proposed most of the changes, said he believes the existing standards are too lenient and the changes would add teeth to the idea that social distancing is important.

“It does us no good to open the schools up and then immediately close or have to shift to another model due to positive cases,” Hansen said. “I think it’s late, but it’s not too late to do the right thing.”

Park City and 24 other districts — mostly in rural areas — will allow students to return full time. Another 16 will shorten days or divide students into groups attending in person on separate days.

The board has required them to offer remote learning for families who don’t feel comfortable sending kids to school. Only Salt Lake City remains fully online.

“What works in Salt Lake City might not work in rural areas where there are few or no cases,” said Scott Neilson, who voted against the failed changes. “Local control doesn’t go away because we have a pandemic. If anything, we need more of it.”

Read the pitch deck that buzzy startup Devoted Health used to reach a $1.8 billion valuation before it signed up a single customer