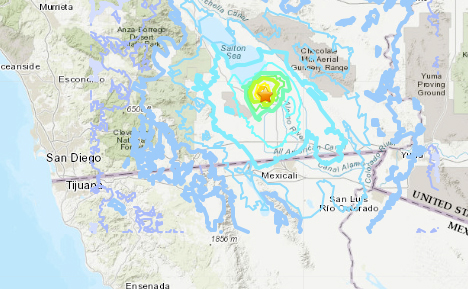 A swarm of earthquakes, the largest magnitude 4.9, rattled Southern California near the Salton Sea on Wednesday evening. No damage or injuries were reported.

More than 90 quakes struck between 4 p.m. and 8:40 p.m. in remote Imperial County, according to the U.S. Geological Survey. Fifty-four of them were magnitude 3 or 4.

The 4.9-magnitude temblor hit just after 5:30 p.m. and was centered 2½ miles northeast of Westmorland, a city of around 2,300 people near the Salton Sea. It was felt in communities along the U.S.-Mexico border and throughout San Diego.

It was California’s largest quake since a 5.8 near Lone Pine on June 24.

Seismologist Lucy Jones said the quakes were in the Brawley seismic zone, where such swarms are common. A similar swarm in early August topped out at magnitude 4.6.

The zone, which produced a magnitude-5.8 earthquake in 1981, is a network of small faults connecting the Imperial and San Andreas faults.

— The Associated Press contributed to this report.

Skelton: California is failing to treat wildfires with respect they deserve

Wildfires, coronavirus and an earthquake collided for California’s terrible week

Instagram’s ‘explore’ page is the best way to grow your brand’s audience. Here’s how an entrepreneur gets an average of 300 followers per day.

September events guide: ten things to do across the UK and in London this month