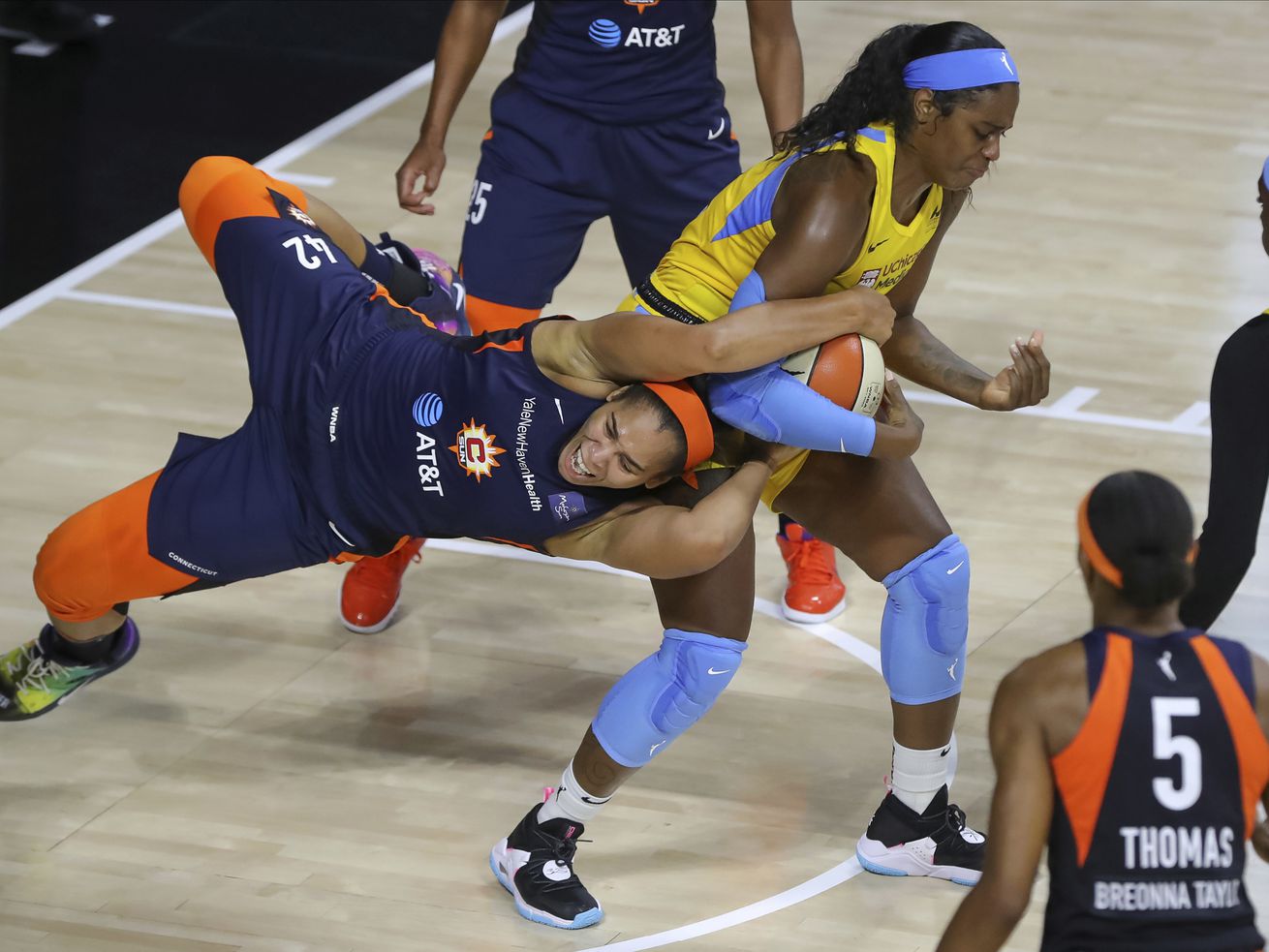 The Sun’s Brionna Jones (left) reaches back to tie up the Sky’s Cheyenne Parker for a rebound Saturday in Bradenton, Fla. | Mike Carlson/AP

Allie Quigley scored 22 points and Cheyenne Parker 20 to carry the Sky to a 100-93 victory Saturday.

BRADENTON, Fla. — Allie Quigley scored 22 points and Cheyenne Parker 20 to carry the Sky to a 100-93 victory Saturday against the Connecticut Sun.

Kahleah Copper added 17 points, Diamond DeShields a season-high 14 points and Courtney Vandersloot 11 assists for the Sky, who shot 32-for-58 from the field (55.2%) and won for the third time in their last four games. The Sky, who had 21 assists on their 32 baskets, are off to a 5-2 start for the second consecutive season.

“We just stuck to our game plan, and we stayed focused,” coach James Wade said. “You didn’t see any distractions. That was like a point of concentration for the team, for myself. We didn’t let distractions bother us, and we just stayed focused on the game. We knew that two or three minutes unsettled could mean a run for them. So it’s a process for us, but we’ll get it right.”

After a three-pointer by Bria Holmes with 1:31 left in the third quarter pulled the Sun -(1-6) to 70-69, the Sky went on a 9-2 run to close the quarter, with DeShields scoring on a three-point play and a jumper. The Sun never got closer than four points the rest of the way.

The Sky bounced back from a 96-86 loss to the Mercury on Thursday, and that result was a motivating factor Sunday.

“Yeah, definitely,” Parker said. “Just our defense was not good at all, and James let us have it in film and I don’t think anyone was happy leaving film. We were all really irritated, not just with ourselves, but just with how humiliating it is to see us on film and see like, ‘Alright, we can give a little bit more effort.’ I think we all had that extra motivation tonight.”

Jasmine Thomas led the Sun with 22 points. DeWanna Bonner and Kaila Charles each added 15, Holmes 12 and Alyssa Thomas and Brionna Jones 11 each.

Trump pops into Kenosha to fan the flames