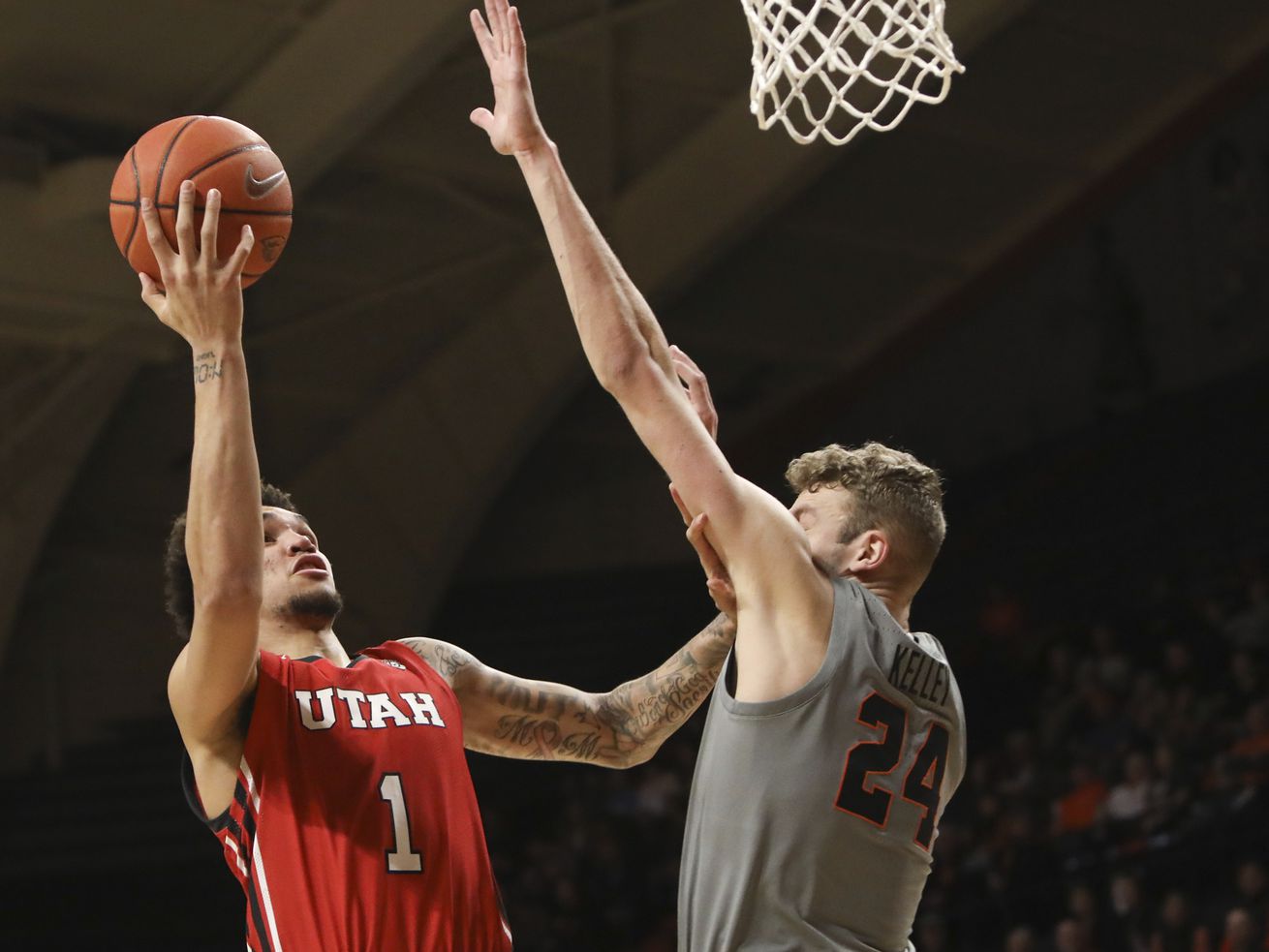 Oregon State’s Kylor Kelley (24) tries to block a shot by Utah’s Timmy Allen (1) during the first half of an NCAA college basketball game in Corvallis, Ore., Thursday, Feb. 13, 2020. | AP

Oregon State gets ahead early and cruises past Utah basketball team

CORVALLIS, Oregon — Another road game, another loss for the Utah basketball team, which fell to 0-6 in Pac-12 play and 1-7 overall in road games with a 70-51 defeat to Oregon State Thursday night at Gill Coliseum.

It was the same old story for the Utes, who dropped to 5-7 in Pac-12 play and 14-10 overall, this one never close after the first few minutes of the game, which has been the case for most of the Ute road losses this year. The Utes trailed by 16 at halftime and couldn’t cut the lead in the second half when they trailed by as many as 25 points.

Offense was the big problem again as the Utes shot a dismal 37.3% from the field, were just 50% from the free-throw line, turned the ball over 14 times and finished with their lowest scoring output of the season.

“We played scared offensively,” said Utah coach Larry Krystkowiak. “We weren’t aggressive, we weren’t getting feet in the paint a lot of times and we didn’t finish strong enough around the rim when we finally did get there. Those are golden opportunities from point-blank range.”

Krystkowiak has talked about different storylines in each of the Ute losses, but this was a familiar one — shooting poorly and getting too far behind early to catch up.

Krystkowiak was especially disappointed with his team’s performance in the first half when it only scored 19 points and trailed 35-19. Three times the Utes missed the front end of one-and-one free throws.

“We didn’t play hard enough on offense in the first half,” he said. “We got complacent. We did a lot of standing on the perimeter. In the second half we moved, we cut without the ball and played together and defensively we were pretty solid, guarding and doing what we needed to do. But you can’t score 19 points in a half and we were in a little bit of a funk offensively.”

Freshman center Branden Carlson was the Utes’ best player Thursday as he scored a team-high 13 points on 5 of 9 from the field while grabbing eight rebounds. Otherwise the Utes didn’t have any players in double figures and no one but Carlson made more than three field goals.

Both Gach returned after missing four games with a leg injury and though he didn’t start, he played 22 minutes and scored eight points on 3 of 7 shooting.

“Both was fine, he gave us a boost and having some additional depth was nice,” Krystkowiak said.

Utah’s leading scorer, Timmy Allen, who had broken out of shooting slump last week against Cal with …read more