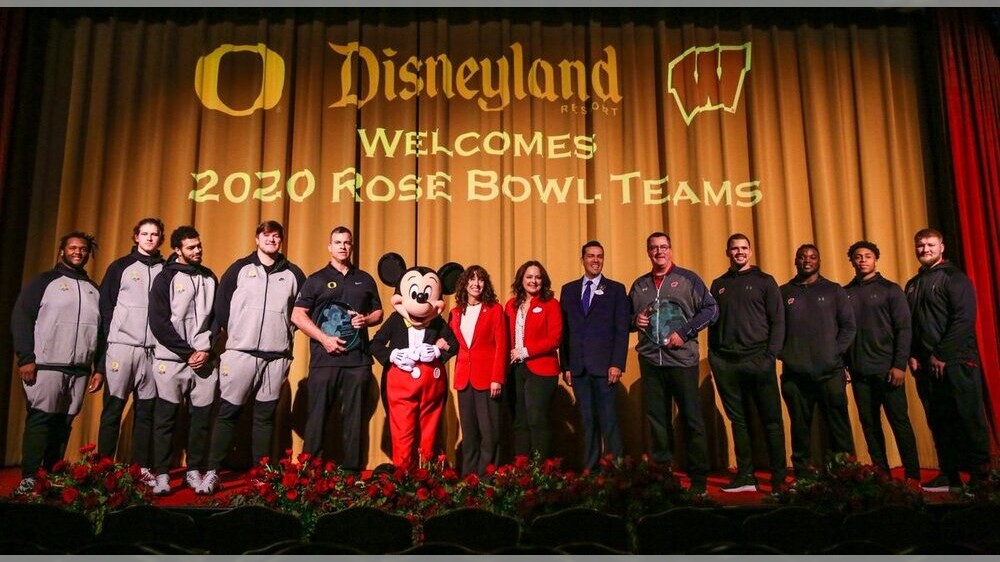 ANAHEIM — No confetti. No cavalcade. No crowd.

For the Oregon and Wisconsin football teams, spending Christmas Day on a flight to Los Angeles was a small sacrifice for what lies ahead the following week in Pasadena with the opportunity to play in the 106th Rose Bowl Game.

Both teams have already started their game preparation, but they spent part of their first day in California, taking center stage inside the Lincoln Theater for the Disneyland Welcome event.

Oregon coach Mario Cristobal and Wisconsin coach Paul Chryst along with select players from each team were introduced in the intimate venue.

The event serves as the first official pre-Rose Bowl Game appearance and the only joint appearance the two teams will share this week. A rainstorm led to drastic changes compared to last year’s welcome event. In 2018, Ohio State and Washington were honored outdoors with pomp and circumstance as the Incredicoaster and Pixar Pal-A-Round at Disney’s California Adventure served as a backdrop.

Cristobal is treating this week as a business trip, and his Ducks (11-2 overall, 8-1 Pac-12) didn’t wait long after landing in California to get back in rhythm.

“We landed and wanted to get a lift on right away and get the body moving so we could get out there early and get an early practice,” Cristobal said. “We work fast and are well into our scheme and what we are planning on doing for the game.”

Oregon QB Justin Herbert on looking ahead to the #RoseBowl and not the “what if” #CFBPlayoff scenarios. pic.twitter.com/QHPvBJBkjJ

With several NFL draft prospects on Oregon’s roster, including quarterback Justin Herbert, Cristobal expects to field a team at full strength without anyone sitting out.

Oregon was ranked No. 6 in the selection committee’s final rankings and is No. 7 in the latest AP poll.

Like Herbert, Taylor has the potential to be an early selection in the 2020 NFL Draft, but he will not sit out the Rose Bowl.

Taylor is this season’s Doak Walker Award winner and the nation’s leading scorer with 26 touchdowns. He has an opportunity to crack the top five of FBS all-time leading rushers if he gains 166 yards against the Ducks.