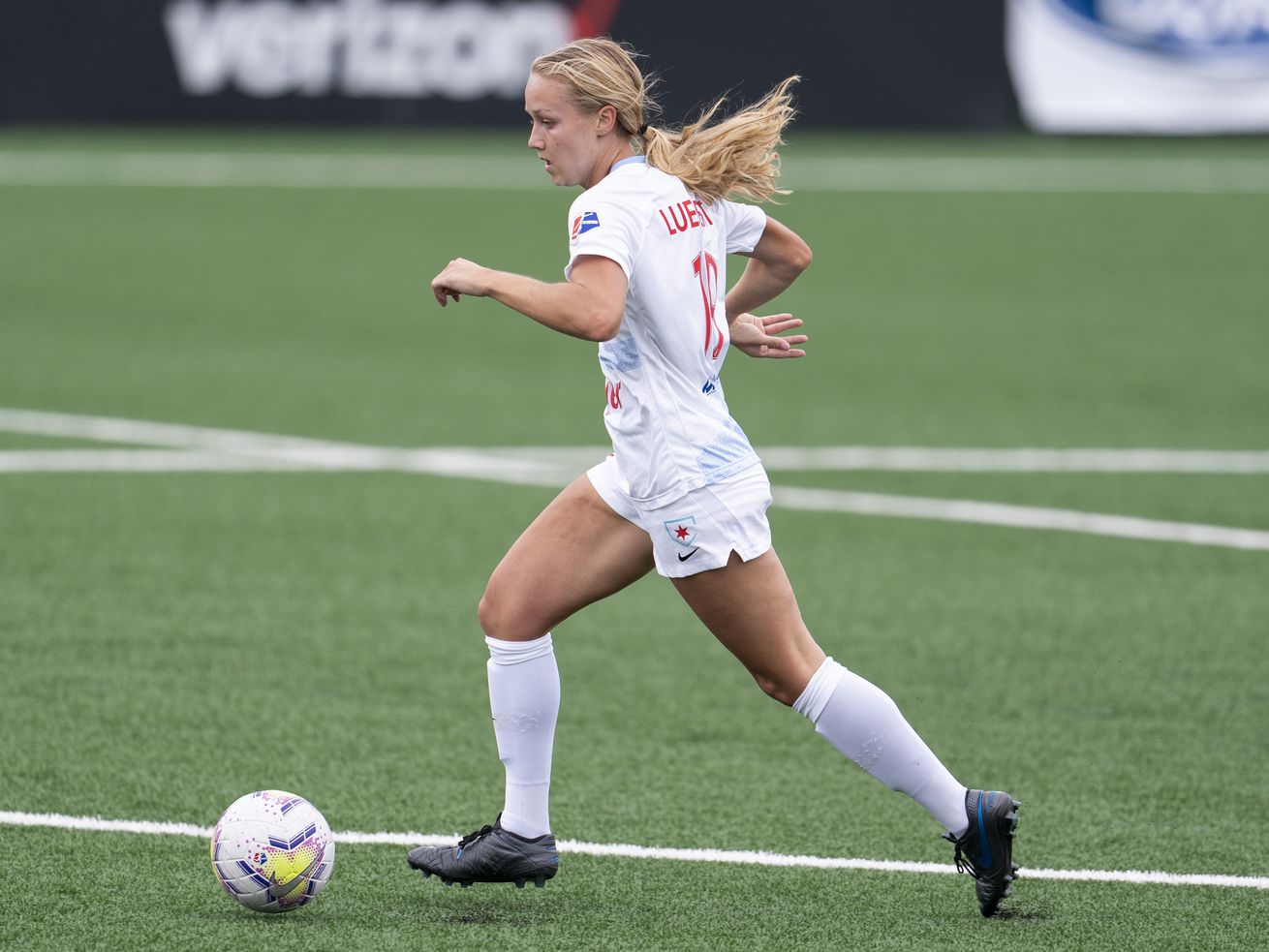 The Red Stars spent this week preparing for Sky Blue, whom they host at noon Sunday at SeatGeek Stadium. The game will be broadcast on CBS All Access.

Red Stars rookie forward Sarah Luebbert had no expectations of playing in the NWSL this season.

She went undrafted in January and was finishing school at Missouri when she got a call from coach Rory Dames about joining the team for preseason training.

Her original plan was to play for the reserves team over the summer before heading overseas to gain more professional experience. When training and the season were postponed in the spring because of the pandemic, Luebbert was given a shot.

“The pandemic weirdly gave me an opportunity to come to the Red Stars’ second preseason training camp,” Luebbert said. “It was really exciting.”

Luebbert remembers joining the team at the end of May with nerves.

She didn’t know what to expect or how she’d fit with the roster, but she had confidence in her ability to keep up with the Red Stars’ fully loaded team.

“I never really thought ‘I for sure have a spot,’ ” Luebbert said. “I do remember after my first few trainings thinking and telling my parents that I thought I could play with the girls, that I could hang.”

Luebbert didn’t receive a ton of reassurance from Dames. Other than a conversation they had after a scrimmage where he tried her out at left back, they didn’t talk at all.

It was during that conversation, though, that Dames got a glimpse at the kind of player Luebbert was. He asked her if she’d be comfortable playing left back more in the future. She said she’d play anywhere the team needed her.

As preseason training began to wind down and the team prepared to leave for Utah and the NWSL Challenge Cup, Luebbert had few expectations. She thought maybe she’d be invited to Utah, or worst case, she’d be cut.

When Dames told Luebbert he needed to speak with her after practice one afternoon, she wasn’t expecting to be offered a two-year contract.

“I made sure to say thank you, but I think that’s all I said,” Luebbert said. “[The first person I called was] my dad. He was like, ‘I’m happy for you, but I’m not surprised.’ ”

Luebbert checked off a career milestone in the Red Stars’ first game of the NWSL’s Fall Series, scoring her first professional goal off a cross from Kealia Watt that she put in the back right corner of the net. The Red Stars ended up losing the match to the Washington Spirit 2-1.

The Red Stars spent this week preparing for Sky Blue, whom they host at noon Sunday at SeatGeek Stadium. The game will be broadcast on CBS All Access.

Luebbert said the game plan is to continue building up in the attack and creating chances. Dames also has said the team is focused …read more