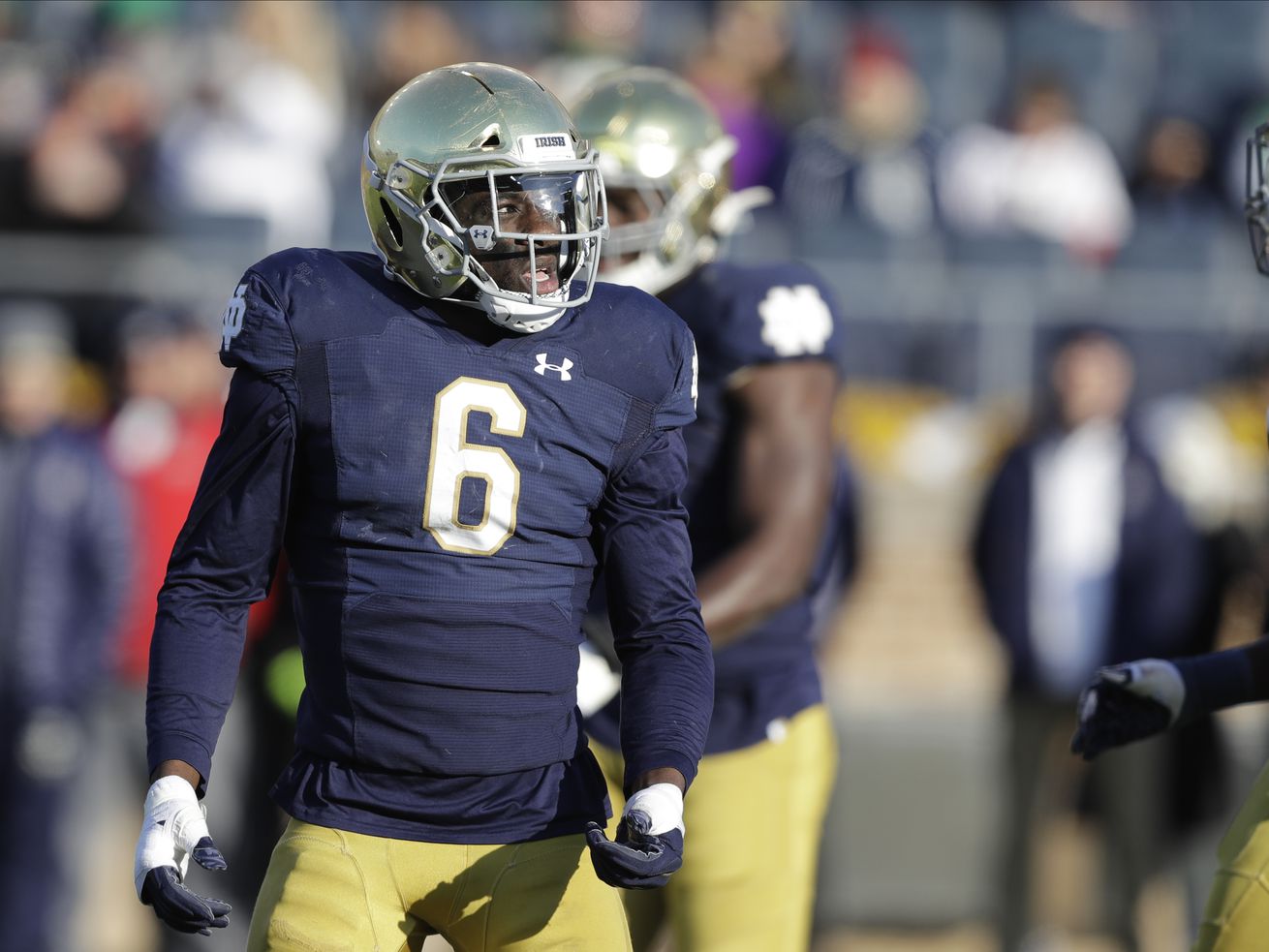 Jeremiah Owusu-Koramoah, who’s projected to be a first-round pick in the NFL Draft, had a team-high 10 tackles, including three for loss, two forced fumbles and two sacks in the victory against Duke last Saturday. | Darron Cummings/AP

The normally reserved and understated Dungy, a regular in the network’s “Sunday Night Football” studio, marveled at the skills of Notre Dame’s Jeremiah Owusu-Koramoah in his first live look at the fourth-year junior rover.

Dungy liked that bit of wordplay so much he came back to it in the second half of a 27-13 victory for the seventh-ranked Irish in their season opener.

Owusu-Koramoah was an unblockable menace all afternoon. He finished with a team-high 10 tackles, including seven solo and three for loss, and tacked on two forced fumbles and two sacks.

It was the sort of performance that justified a summer’s worth of pre-draft hype for the projected first-round pick. CBSSports.com, in a mock draft published this week, has Owusu-Koramoah going 32nd overall next spring.

“Being a humble guy, I believe I can make a play every play,” Owusu-Koramoah said in the postgame session with reporters. “But I can’t do anything without my teammates or my coaches.”

A product of talent-rich Hampton, Virginia, where he remembers attending a motivational speech from Allen Iverson at a youth sports event, Owusu-Koramoah gave an indication of his mindset when he praised the play of freshman end Isaiah Foskey.

That willingness to play fast and with a reckless abandon was the basis of the rover’s pregame message to his fellow defenders.

The same could be said of Owusu-Koramoah, who shined as a basketball prospect on the AAU circuit, where he regularly faced older opponents. An all-state defensive selection at Bethel High, he was feared for his ability to guard any opponent, regardless of size or position.

“Whoever the best player was on the other team, Jeremiah was going to check him and he was going to shut him down,” said Edward Price, a former college linebacker who has trained and coached Owusu-Koramoah since he was 8. “Not because he was big enough. He wasn’t. It’s just …read more

The RNC was pure propaganda designed to sanitize Trump’s damning record on race, immigration, women, and the pandemic