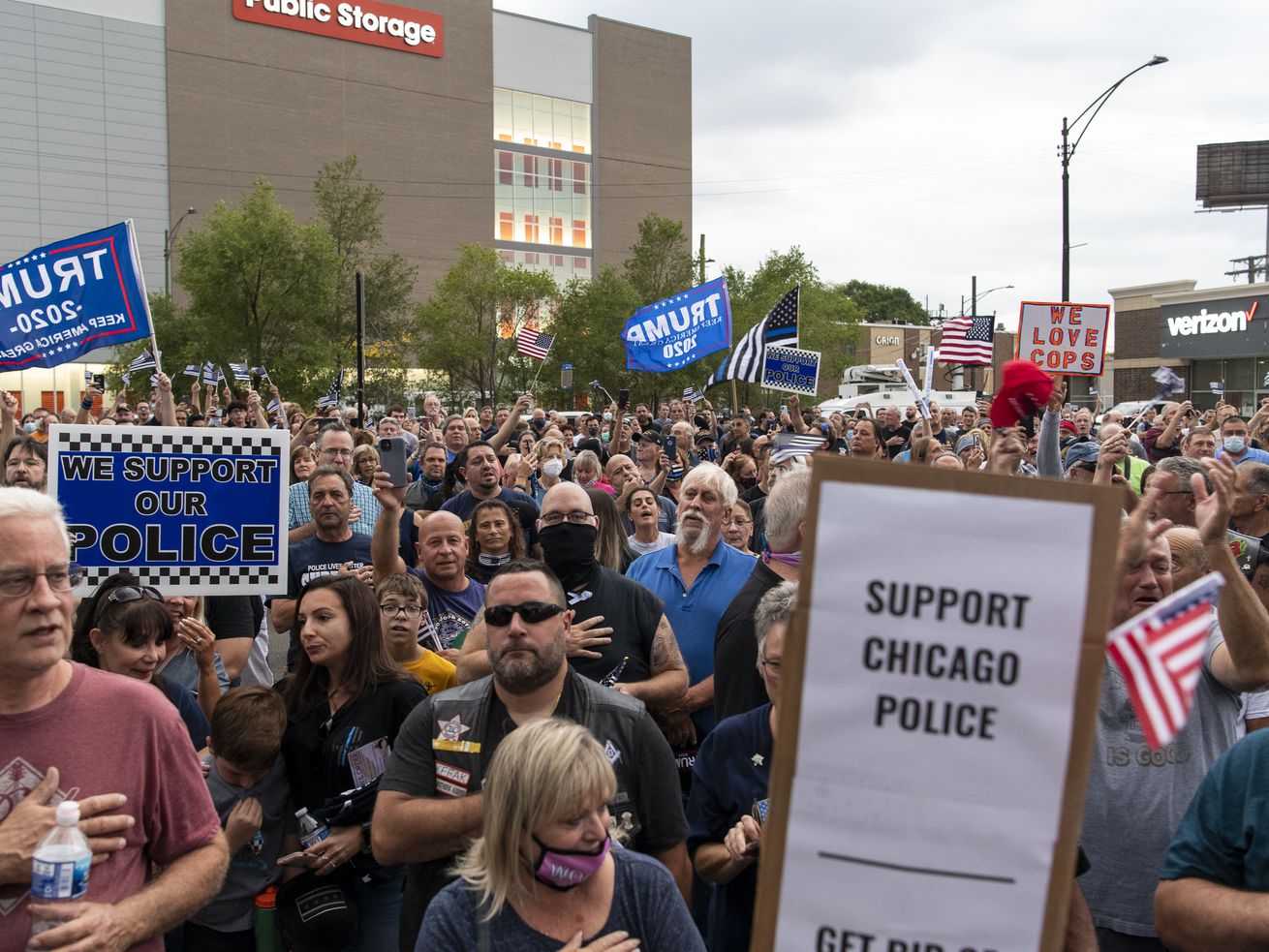 Hundreds at a “Back the Blue” rally outside the Jefferson Park police district hold their hands to their heart during the national anthem Wednesday, Sept. 16, 2020. | Tyler LaRiviere/Sun-Times

Fraternal Order of Police President John Catanzara accused Mayor Lori Lightfoot of being the heavy hand behind the cancellations. Two of the three aldermen denied mayoral pressure was the reason they won’t appear.

A “Back the Blue” rally outside the Jefferson Park police district Wednesday night drew more than 600 police supporters and nearly four dozen counterprotesters.

Some wore masks as they roamed the street waving police flags; many did not. Besides a yelling match between the two groups, overall, the event remained peaceful.

Despite organizer Ald. Nick Sposato’s (38th) hope to avoid politics, the event took on a political undertone, which was ultimately the reason some aldermen had earlier decided not to attend.

Many in the crowd waved Trump 2020 flags, and some wore MAGA hats. U.S. Senate candidate Willie Wilson made an appearance, too, though he didn’t say more than a mere “hello.”

Between speakers, Sposato — who co-sponsored the event with other Northwest Side Alds. Anthony Napolitano (41st) and Jim Gardiner (45th) — reminded people that this was a “positive event” not a political one.

However, that didn’t stop Fraternal Order of Police President John Catanzara from bringing up the union’s ongoing contract negotiations, which frustrated Sposato.

“The only thing that was uncomfortable — a couple people went too long, and we brought politics into it, and the politics was the union contract,” Sposato said. “He wasn’t supposed to say that. This is all about the positivity of the rally, so I was a little disappointed about that. John’s my friend, you know, but whatever.”

What’s the reason for yellow frames on traffic lights? Roadshow

Earlier in the day, Ald. Chris Taliaferro (29th), a former Chicago police officer now chairing the Public Safety Committee, and Taliaferro’s predecessor, Ald. Ariel Reboyras (30th) — who decided not to attend the rally — were accused of backing out under pressure from Lightfoot and from constituents who support defunding the Chicago Police Department.

Taliaferro said the “Back the Blue” rally was turning into a political show.

“I can guarantee you we are going to find people to run against these aldermen. Enough is enough,” Catanzara said.

“They listened to the squeaky wheels. They got a couple phone calls from their constituents [saying], ‘You can’t possibly go.’ Now, they’re gonna be cowards and … back out. Shame on them. Every single member of that committee should be at that rally. Every single one of ’em. We are gonna be paying attention to see who shows up and who doesn’t.”

Catanzara said he has no doubt Lightfoot was a heavy hand behind the no-shows.

“Look what happened when [Ald.] Ray Lopez tried to get the National Guard here. In the Public Safety Committee, only two of ‘em voted ‘yes.’ Napolitano and Lopez. Everybody else cowered out. Including some of our big backers. I love Nick Sposato. But, Nick Sposato voted ‘no’ too,” the FOP president said.