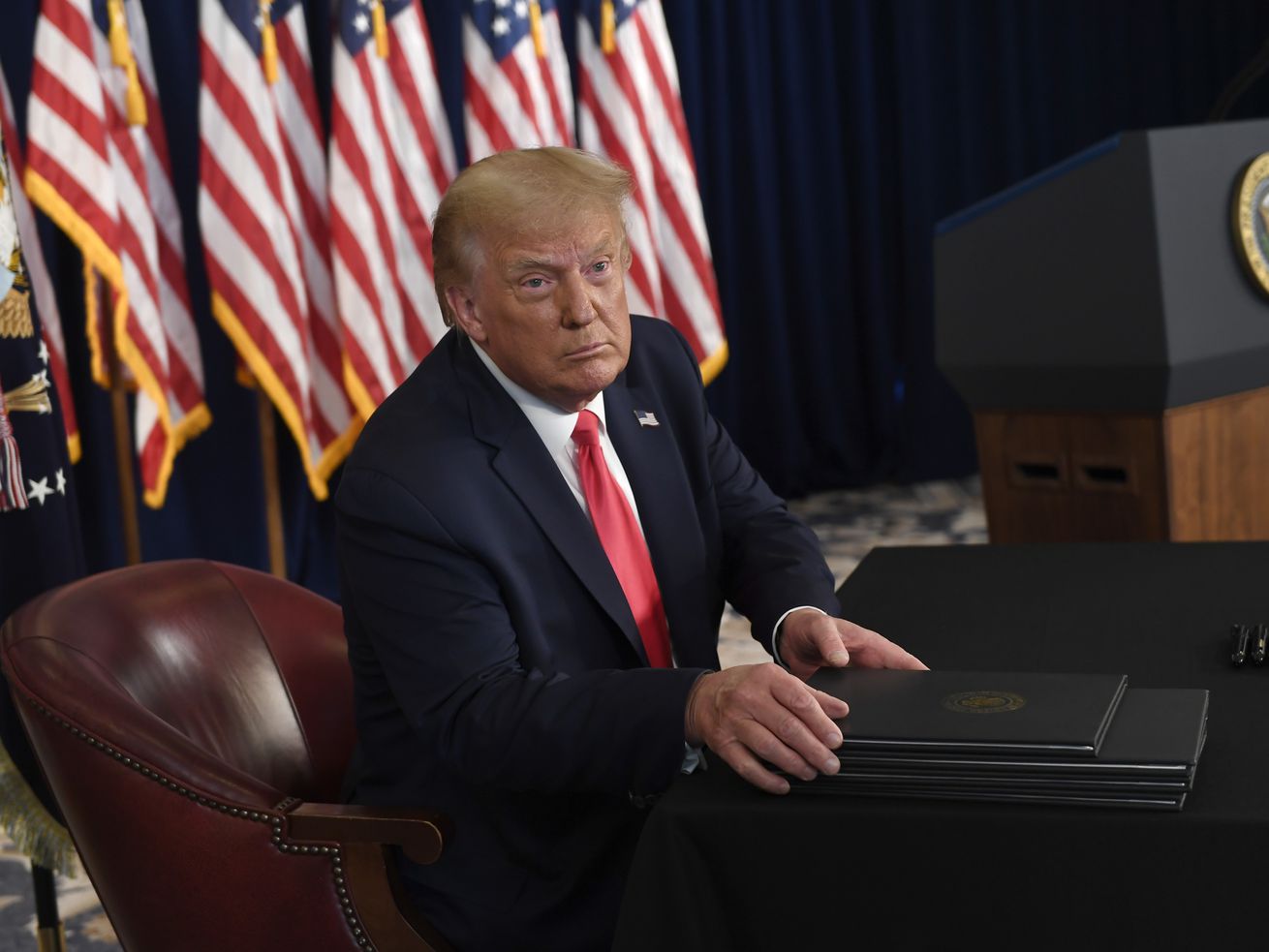 President Donald Trump prepares to sign four executive orders during a news conference at the Trump National Golf Club in Bedminster, N.J., Saturday, Aug. 8, 2020. Seizing the power of his podium and his pen, Trump on Saturday moved to bypass the nation’s elected lawmakers as he claimed the authority to defer payroll taxes and extend an expired unemployment benefit after negotiations with Congress on a new coronavirus rescue package collapsed. | Susan Walsh, Associated Press

SALT LAKE CITY — A group calling itself Latter-day Saints for Trump and co-chaired by retired Utah Sen. Orrin Hatch intends to promote the reelection of the president among members of its faith.

“Latter-day Saints for Trump will work to mobilize and energize Latter-day Saints communities across the country to re-elect President Donald Trump by focusing on and educating the community on the many successes of the Trump Administration,” according to the group’s website.

Hatch, who retired in 2019 after 42 years in office, was one of Trump’s early supporters and strongest defenders in the Senate.

The post shows the names and pictures of the group’s 18-member advisory board with the Salt Lake Temple as a backdrop.

The group is not affiliated with The Church of Jesus Christ of Latter-day Saints, which maintains a neutral stance in matters of party politics.

The church does not endorse, promote or oppose political parties, candidates or platforms. It does encourage its members to play a role as responsible citizens in their communities, including becoming informed about issues and voting in elections.

latterdaysaints.donaldjtrump.com
A screenshot of the Latter-day Saints for Trump website shows members of the group’s advisory board.

According to the coalition. “Re-electing President Trump will ensure continued victories in school-choice reform, pro-life issues, judicial appointments and religious freedom. As citizens of this nation and members of the Latter-day Saints community we must be active and cannot be idle spectators in this important mission.”

The Trump campaign already has its eye on the Latter-day Saint vote.

Vice President Mike Pence mentioned plans to launch a “Latter-day Saints for Trump” coalition during a speech Tuesday in Mesa, Arizona, in what is becoming a battleground state. Pence and Democratic vice presidential candidate Kamala Harris are scheduled to debate at the University of Utah in October.

Samantha Zager, the Trump campaign’s deputy national press secretary, told the Arizona Republic that Trump has been a “staunch defender of religious communities.”

“President Trump’s victories on school choice, pro-life issues, judicial appointments and religious freedom have benefited the LDS community,” Zager said in a written statement, and the Latter-day Saint coalition is “dedicated to spreading the message of those successes.”

But another group of Latter-day Saints in Arizona denounced Trump in a letter Tuesday, and called the coalition “out of bounds” for co-opting the church’s name to give the impression that Trump is supported by the church.

“For us, this election is not about parties and tribalism. It is about reclaiming our core values. President Trump …read more

A former White House medical advisor said the uncoordinated US coronavirus response has led to people to ‘distrust the messenger,’ sparking rampant and dangerous misinformation

72% of Americans uncomfortable going to a theme park, poll finds