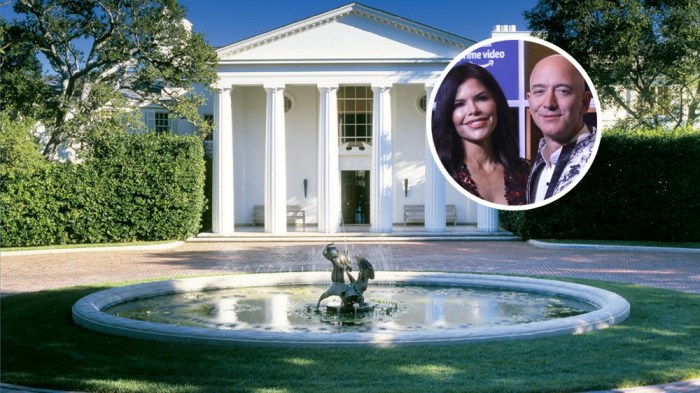 The Roaring ’20s redux has only just begun, but it’s already been a whirlwind decade for Amazon head honcho Jeff Bezos and his girlfriend, former TV news anchor Lauren Sanchez. The couple made their public red carpet debut in India, purchased their neighbors’ home in Washington D.C., and have just capped off a Beverly Hills real estate money flex that’s one for the record books.

For the last few months, it’s been widely rumored that Bezos and Sanchez have been house-hunting in Los Angeles, and now the Wall Street Journal reveals that they’ve sealed the deal(s) in a truly epic manner befitting the planet’s biggest bank account.

The couple has locked down two enormous estates in the coveted 90210 zip code, paying a California record $165 million for David Geffen’s legendary Jack Warner estate in Beverly Hills. They shelled out another $90 million for the vacant Enchanted Hill estate in the Beverly Hills Post Office neighborhood, sold by the estate of the late Microsoft co-founder Paul Allen.

Although the Jack Warner property was never officially listed for sale, it’s no secret among high-powered real estate brokers that Geffen has wanted to sell the massive spread for many years. As far back as 2007, there were whispers about the billionaire toying with putting the Roland Coate-Designed manor on the market with a $100+ million pricetag, though it never officially surfaced on the MLS.

Geffen purchased the estate 30 full years ago, back in 1990, for $47.5 million. At that time, his splurge was reportedly the highest price ever paid for a home in the United States. He’s since extensively renovated the property, which encompasses nearly 10 flat acres — all of them fully landscaped with dozens of specimen trees, enormous swaths of grassy lawn, and a 1937 colonial-style main house that spans 13,600 square feet of living space. There’s also a separate, secluded pool complex area with guest quarters. Naturally, the whole spread — which is sited at the northern edge of Beverly Hills in lower Benedict Canyon — is walled, gated and protected with a state-of-the-art security system. The property is also surrounded by one of the tallest hedgerows in all of Beverly Hills.

Just about 1.7 miles up the hill from the Jack Warner estate lies a vacant hilltop property. Known as Enchanted Hill, this is the estate last owned by Paul Allen, who purchased the 120-acre spread in 1997 for $20 million, razed the existing ranch-style structures, and replaced them with little more than a flat grassy pad. Allen reportedly planned to build a private compound on the property, but that project never came to fruition.