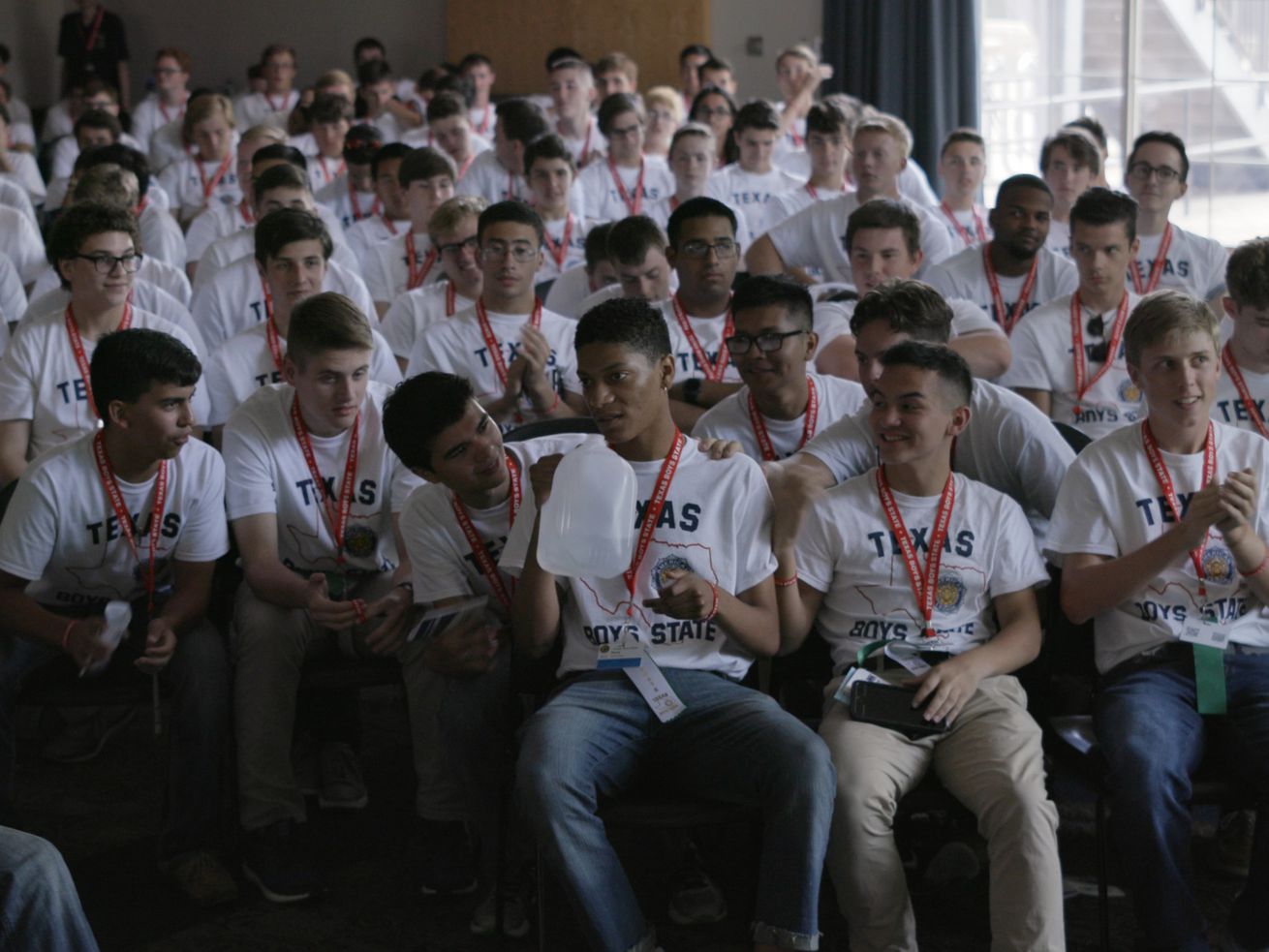 The eyes of Texas high school boys are on Chicago transplant René (center, with jug) in a scene from the documentary “Boys State.” | AppleTV+/A24

For every moment of inspiration and hope in the teen-political documentary “Boys State,” when you find yourself thinking, By gosh, the kids are all right, there are at least two jaw-dropping instances of 16- and 17-year-olds compromising their values with such cynicism you weep for our future.

Why, it’s almost as if these teenagers have been paying attention to how the American political system works, and they’re well-versed in playing the game before they’re even out of high school.

As the wife-and-husband directing team of Amanda McBaine and Jesse Moss explain in an opening graphic, “Since 1935, the American Legion has sponsored a program for teenagers to learn about democracy and civil discourse. … There are separate programs for boys and girls.” Seems a little, um, OUTDATED to keep the programs separate, but there you have it. The filmmakers chose to chronicle the Boys State program in Texas as more than a thousand high schoolers gather in the state capital of Austin, are randomly divided into two parties known as the Nationalists and the Federalists, and wage a compressed campaign for “governor” and other elected offices — just like the grown-ups! It’s like a political fantasy camp.

As the directors use classic fly-on-the-wall doc tactics, we follow a number of hopefuls from orientation through the election, including Steven, a liberal moderate with an immigrant mother who struggles just to get the 30 signatures required to make the gubernatorial ballot but quickly establishes himself as a charismatic, passionate force; Eddy, a cocky Italian-American who says his washboard abs are his best political asset; Rene, a Black transplant from Chicago with an impressive grasp of politics and history who becomes his party’s chief and almost immediately faces calls for impeachment; Ben, a double amputee who never complains about his disability and shows a cunning acumen for campaign gamesmanship, and Robert, a handsome jock type who, like most of the candidates, is strongly in favor of guns, God and country. Or is he? As Robert admits in an interview away from the roaring crowd, “My stance on abortion would not line up well with the guys out there, so I chose to pick a new stance.”

Just like that. As if he had picked a new favorite type of sneaker.

AppleTV+/A24
Candidate Robert decides to reverse his position on abortion in “Boys State.”

One candidate is “smeared” because he has committed the offense of marching in gun control rallies. A campaign operative engages in dirty tricks and cheerfully says, “You …read more

Federal officers stockpiled semi-automatic rifles and tried to obtain a controversial ‘heat ray’ ahead of tear-gassing protesters for Trump’s photo-op, a whistleblower says

Ivanka Trump said her son built a Lego replica of the White House for her father. She told a suspiciously similar story about herself 13 years ago.