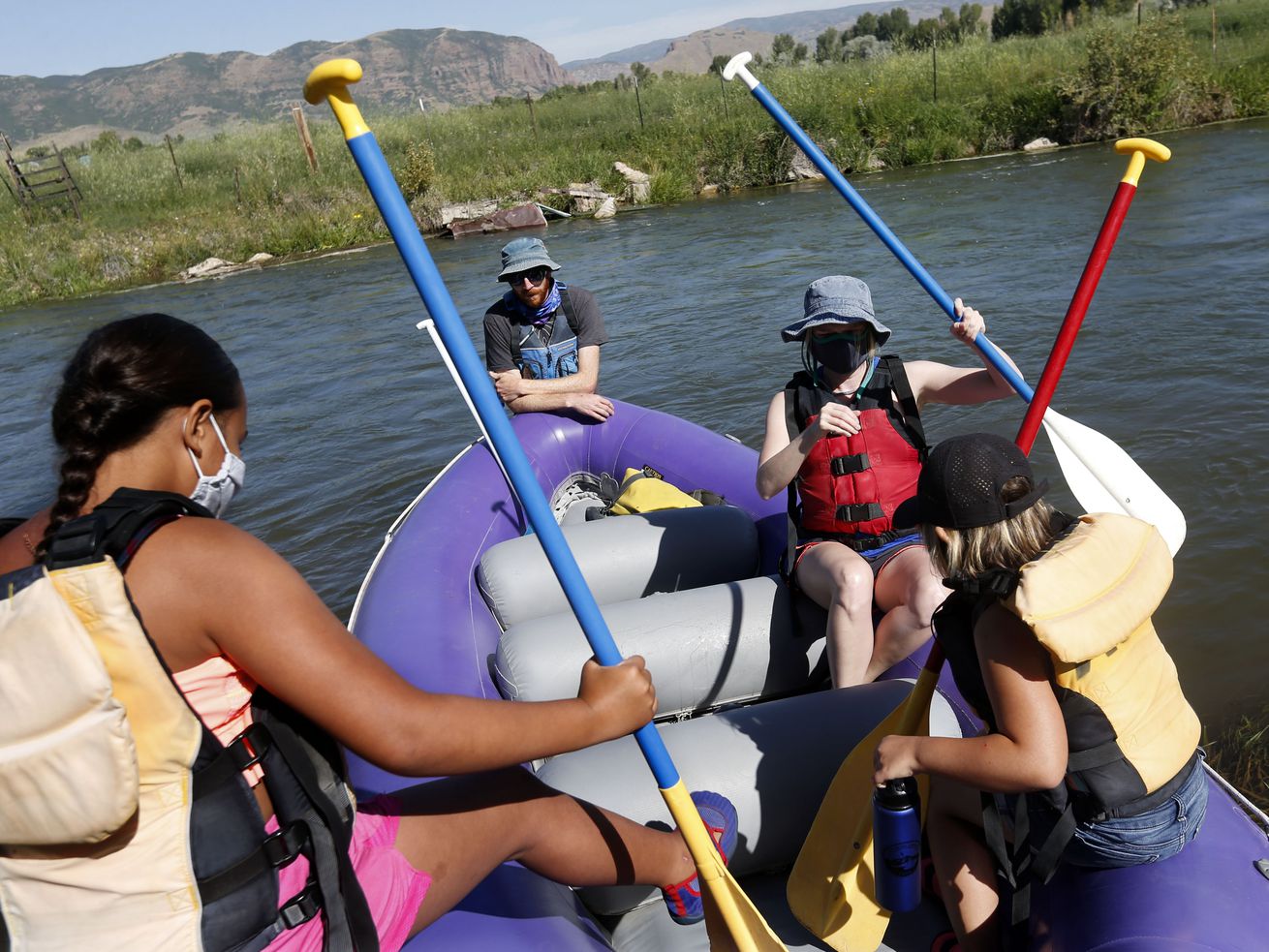 River guide Jeremiah McFerrin secures a raft as Camp Hope Utah program manager Julianna Potter and campers get in before rafting the Weber River in Henefer, Summit County, on Thursday, Aug. 13, 2020. The vast majority of Camp Hope programs nationwide — designed to help kids from abusive homes make some happy memories — have been canceled, but Utah’s has transformed into a series of daytrips with outdoor sports like kayaking, paddleboarding and river rafting. | Laura Seitz, Deseret News

Program in its first year aims to help children heal after trauma, with a few social-distance tweaks

SALT LAKE CITY — The odds of pulling off a traditional sleep-away camp seemed slim even months ahead of summer. S’mores, swimming trips and singalongs don’t usually fit the confines of social distancing.

But several children had already signed up for a new sleep-away program just for kids who have survived abuse or have seen it happen in their homes. So Camp Hope organizers in Utah found another way to help the kids have some fun and work on their confidence in the program’s first year: a series of day trips with activities like horseback riding, river rafting and fishing.

The virus had already put on hold other sorts of fun, shuttering schools and canceling play dates, noted Julianna Potter, the program manager for the Utah camp.

“I just really didn’t want this to be just one more big disappointment for them,” Potter said as she rode in a bus to the Weber River with volunteers, a handful of campers in masks and a healthy supply of hand sanitizer. “We just tried to think really creatively and think, ‘Is there a way to do this where we can make it both fun and safe?’”

In light of coronavirus outbreaks, versions of the same summer program across the country have either moved online or called off the camp until next year. Just a handful have found ways to still host activities, Potter said.

Fifteen children ages 8-12 are participating, and Potter hopes to grow the number to 60 next year. It’s the first time the camp has been held in the Beehive State after the Salt Lake County District Attorney’s Office secured $500,000 in grants to host it.

Groups of five children at a time have taken a handful of different half-day trips, sitting several seats apart on bus rides before perfecting their archery skills, taking turns at the front of a raft as it navigated rapids on the Weber, or paddling in canoes, kayaks and paddleboards at Jordanelle Reservoir.

“They’ve had the chance to try these new things and feel success and I think that’s been good for all of them,” Potter said. “Our goal is to kind of give them that power back.”

Several of the youngsters were reluctant to climb atop horses and hit the trail. Some gripped saddles in terror at first. But by the end of the ride, many were sitting tall and smiling, Potter said.

One in …read more

Californians are most likely to move to these 4 states next, UBS says