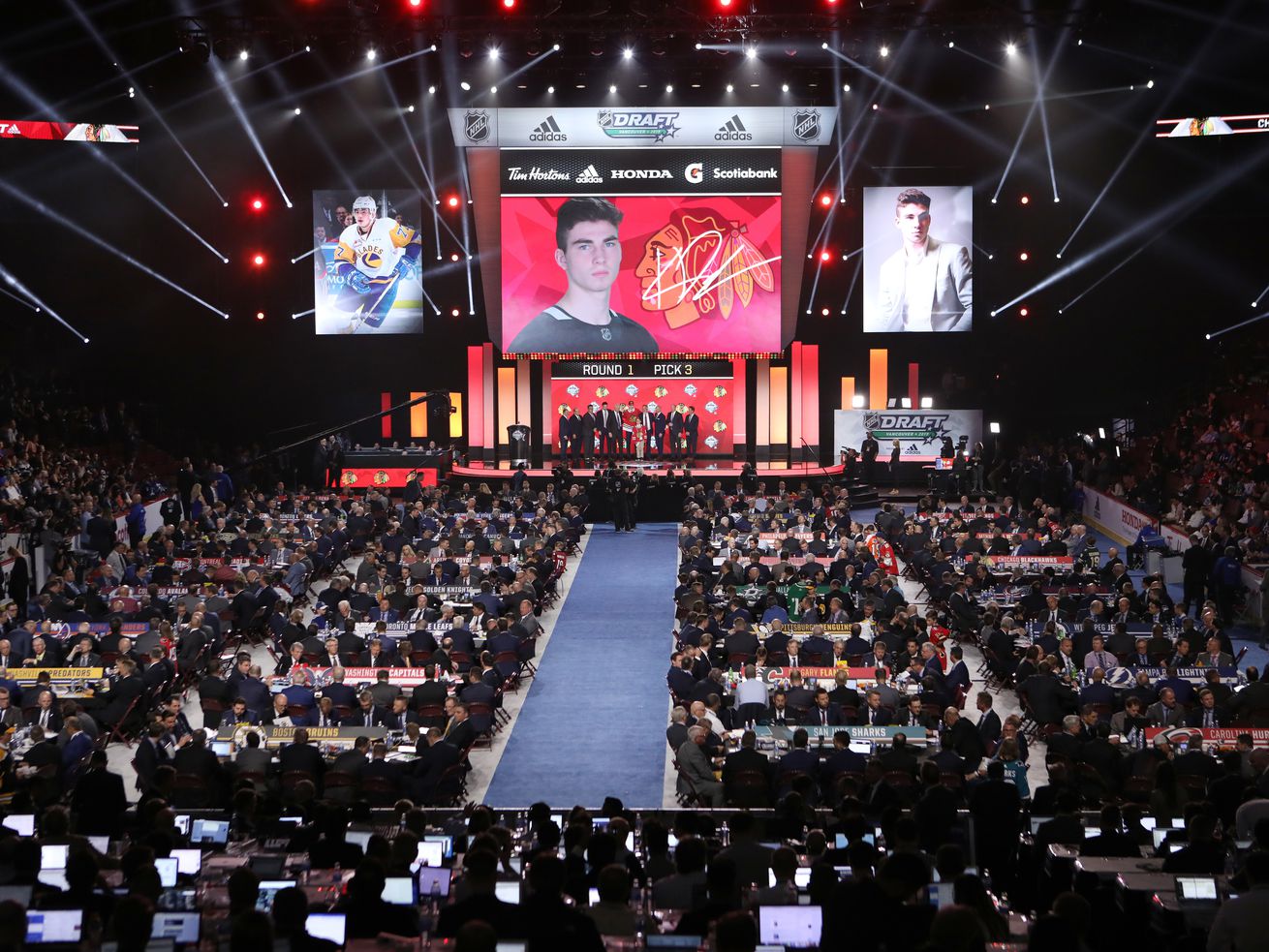 The Blackhawks controlled their own destiny when picking Kirby Dach third overall last year, but won’t have the same luxury with the 17th pick this year. | Getty

Askarov probably won’t be available for the Blackhawks at No. 17 overall, but he could be — and that’s an enticing possibility.

Last year, the Blackhawks essentially controlled their NHL draft destiny with the No. 3 pick.

With Jack Hughes and Kaapo Kakko virtually guaranteed to go first and second, as they eventually did, the Hawks were able to start the domino chain by choosing Kirby Dach out of a number of viable candidates.

This year, the Hawks won’t have nearly as much control.

Holding the No. 17 pick in the draft, which will take place Oct. 6-7 — just over three weeks away — the field of options from which Hawks scouting director Mark Kelley will choose the franchise’s newest top prospect will be greatly affected by the many teams picking beforehand.

With a massive crop of solid forward prospects projected to go roughly in the middle of the first round — from Seth Jarvis, Connor Zary, Noel Gunler and Dylan Holloway to Dawson Mercer, Hendrix Lapierre, Rodion Amirov and Jan Mysak, the list goes on and on — the Hawks should regardless be able to land a solid player in their pipeline’s area of greatest need.

That is, unless consensus top goaltending prospect Jaroslav Askarov falls into their lap.

In such a deep and largely positionally homogenous draft class, Askarov is a wild card. He’s a goalie, which are rarely chosen in the first round due their unpredictable, years-long development curves prior to becoming NHL-ready.

He catches with his right hand, a rare preference used by only six NHL goalies this season (only one, Colorado’s Pavel Francouz, was a regular).

He’s Russian and currently playing in the second division beneath the Kontinental Hockey League, where many NHL-drafted players spend their entire careers without ever coming to North America.

But he’s also been lauded by many as a potential cornerstone goalie, in the same vein as Montreal’s Carey Price (drafted fifth in 2005) and Tampa Bay’s Andrei Vasilevskiy (19th in 2012).

“He is such a monster in the crease, as good as any goalie I’ve seen at his age going post to post,” Chris Peters wrote in ESPN’s final draft rankings, putting him seventh.

“Askarov has the chance to be the best goalie of his generation,” wrote Ryan Kennedy in The Hockey News’ final draft rankings, putting him 10th.

The Askarov hype was actually even higher before a mediocre showing in the IIHF World Junior Championship last winter, when he recorded an .877 save percentage in five games.

Yet his numbers in other competitions have been stellar, including a .920 save percentage in 18 games for his usual club team, SKA-Neva St. Petersburg, last season and a .916 save percentage in six games in the 2018-19 U-18 World Junior Championship. Plus, the 2020-21 Russian hockey season is already underway, so he’ll be adding to his statistical sample size …read more

Fox News anchor Chris Wallace says he’s disappointed on behalf of America after a disastrous first debate between Trump and Biden, but says he’s fine with his performance as moderator