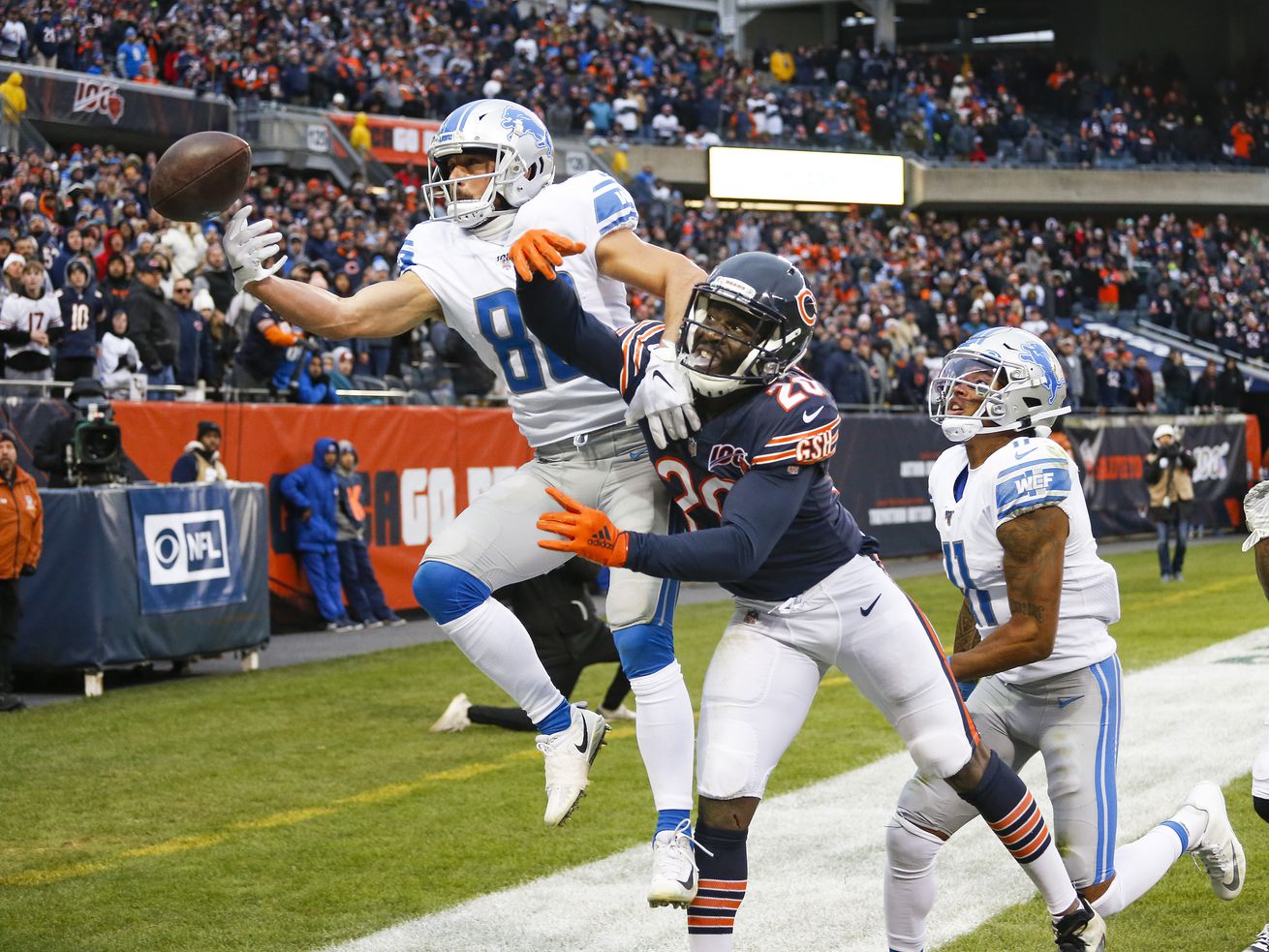 The Lions are unable to catch a heave into the end zone as time expires Sunday. Quarterback Jeff Driskel was flagged for being past the line of scrimmage on the throw anyway. | Photo by Nuccio DiNuzzo/Getty Images

Chicago’s hottest club — or maybe it was oh-so-2018 — opened Sunday after being closed for 42 days.

Chicago’s hottest club — or maybe it was oh-so-2018 — opened Sunday after being closed for 42 days.

Bass thumped through the the ground-floor concrete at Soldier Field. Eddie Jackson and running back Tarik Cohen performed their own dance-off in the middle of the locker room. Bears coach Matt Nagy sat back and watched the scene at “Club Dub” after a 20-13 victory against the Lions ended their losing skid.

Sunday’s win came with asterisks: Lions quarterback Matthew Stafford, an MVP candidate, was ruled out Sunday morning because of reported broken bones in his back. The Lions’ starting rushing back left with a concussion in the first half. Their defense is second-worst in the league.

Such circumstances hadn’t sparked the Bears before, however. They’re 4-4 in games in which they’d been favored, losing a backup quarterback and running back [the Saints] and another defense ranked No. 31 at the time [the Chargers].

The result would have different had Stafford played, perhaps. But the Bears won’t apologize for their first win since Week 4.

Some on social media had clamored for the Bears to close the club altogether as a nod to their skid — and the fact this season lacked the joy of last year.

“I think that’s hilarious,” cornerback Prince Amukamara said. “I think it’s kinda ignorant … The reason why we do it is because we know how hard it is to win in this league. …

“The fact that we did it rejuvenated us.”

Asked why he kept the club open, Nagy said, simply: “That’s who we are.”

The Bears have talked for a month about how a win could be the pressure-release valve they needed. Now that it’s here, they’ll need to be much better to have a chance against the Rams in prime time next week.

What it means long-term, though, is far less clear. The playoffs still appear a pipe dream for a team that climbed out of last place in the NFC North on Sunday.

“We’ve been trying to turn it around,” receiver Allen Robinson said. “Of course we can build off this win, but we can’t sit back and do too much with it. We have a game in a week.”

Most of the first half, the Bears looked like the same team that tripped all over itself in the first 30 minutes against the Eagles. They went three-and-out on three of their first four series, drawing boos from a crowd seemingly used to such ineptitude this season.