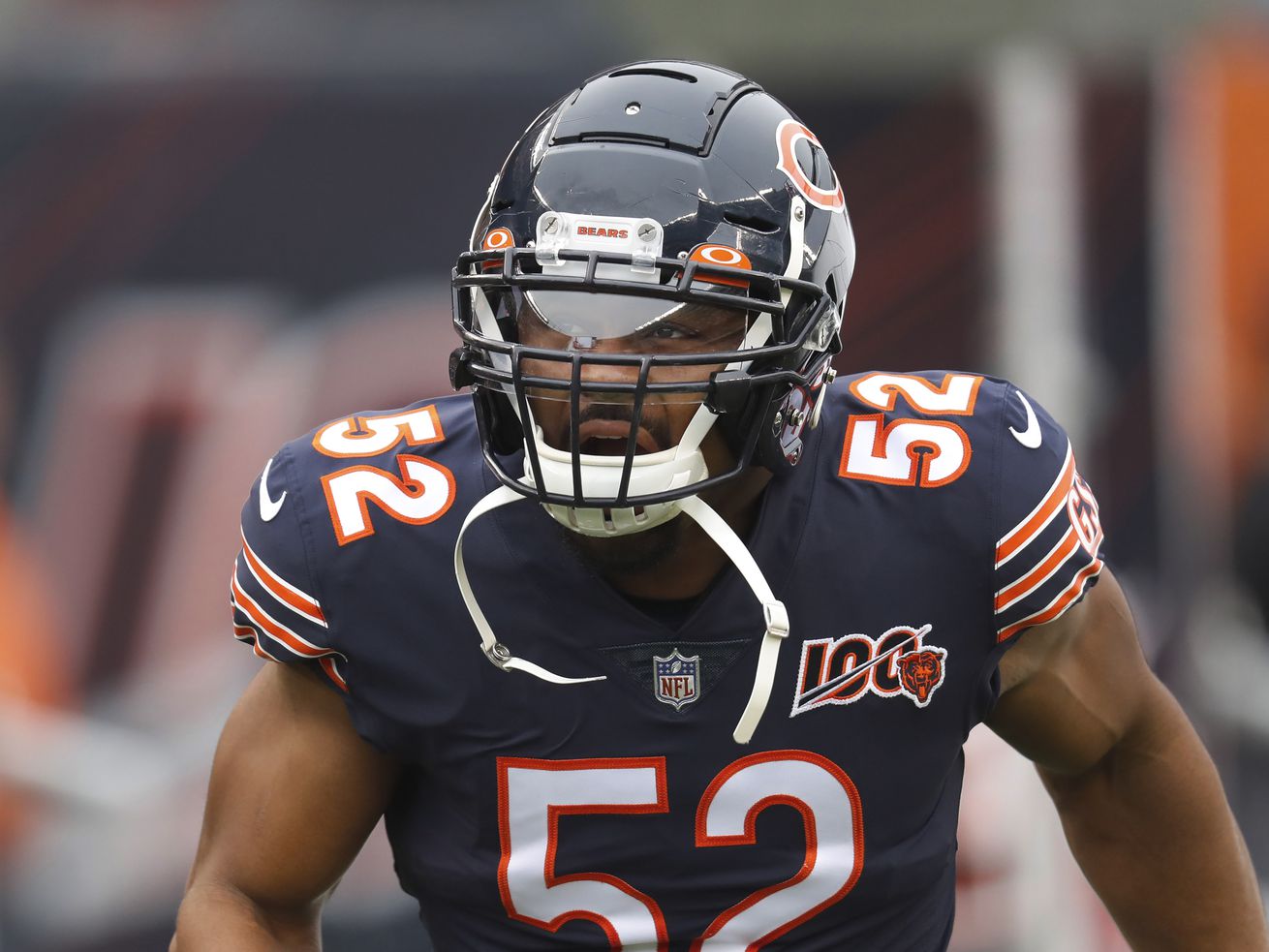 “All I see in his eyes,” brother Ledarius Mack said, “is he wants to win.”

Outside linebacker Khalil Mack was supposed to talk after practice Friday. The news conference was postponed, then eventually canceled, leaving his interview total for the 2020 calendar year to one 12-minute session in mid-August. On Zoom. While riding a Peloton bike.

It’s clear he likes it this way. Since he arrived in Chicago — and even during his four years with the Raiders — Mack has been more interested in working than talking. And even less interested in talking about his work.

This year, though, his preference for silence can be interpreted as symbolic.

For the Bears to be the team they want to be, Mack must be the star they traded for. Last year, he wasn’t. It drives him.

“Only thing that’s different is my mindset,” he said last month. “I don’t really know what to call it.

“I don’t talk about it much. I’d rather let my play do the talking for me.”

By his high standards, last year’s stats were alarming:

† As the NFL’s highest-paid defensive player, Mack had 8½ sacks, eight tackles for loss and 14 quarterback hits — his lowest totals since his rookie year in 2014.

Mack wouldn’t deny rumblings that he was injured last year — “Playing this game, you deal with all types of stuff,” he said — and defensive coordinator Chuck Pagano confirmed as much Thursday when asked why he was primed for a better season than in 2019.

“He feels great, he looks great,” Pagano said. “He’s moving around really well. I think just the health part of it and him being 100% right now, and then, you know, just eager to get out there and make amends for last year, if you will.

‘‘He’s got a chip on his shoulder, and I know he’s really excited to go.”

Mack was officially limited in practice with a knee problem this week and is questionable for the game Sunday. But the Bears seem confident he’ll play — and that he’ll be better off than he was for most of last season.

He wasn’t the only one hurt last year. Defensive lineman Akiem Hicks and inside linebackers Roquan Smith and Danny Trevathan combined to miss 22 games with serious injuries.

So why were Mack’s stats down last year?

“It’s complicated to answer because I think the injuries we had on defense really affected him,” general manager Ryan Pace said. “I think when Akiem is injured and Roquan’s injured or Trevathan and different things we’re going though with our defensive line, I think it affects Khalil, you know?

Lute Olson, the Hall of Fame coach who turned Arizona into a college basketball powerhouse, has died at the age of 85.

Democrats make it official, nominate Biden to take on Trump