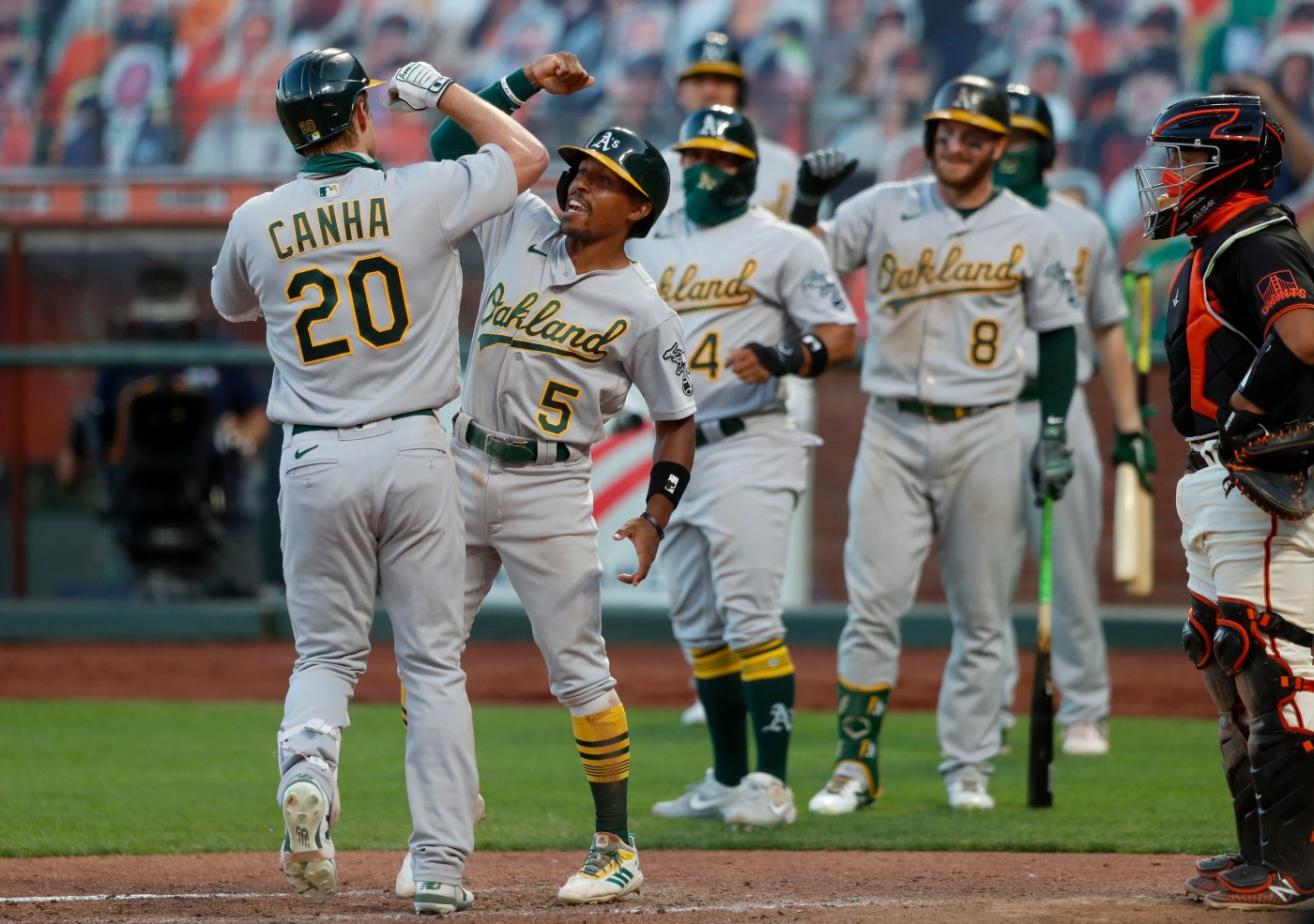 SAN FRANCISCO — There were too many déjá vu moments in the A’s eventual 7-6 comeback win over the San Francisco Giants to ignore. Every sign indicated the Oakland A’s would repeat Friday’s comeback heroics Saturday.

“I was trying to go deep,” Canha said of his approach against Trevor Gott. “Just, hit a homer and let’s win this game.”

Canha knew Gott liked to throw that breaking ball, so he sat on it with two strikes. The curveball he struck was still sailing as Canha rounded first and turned to his dugout to point to teammates reliving for a second night comeback jubilation.

The sequence of events felt familiar even before Canha’s blast-‘n-point. The A’s were down three runs in the ninth inning. The San Francisco Giants had their quasi-closer, Gott, in for a chance to redeem Friday’s blown save. Check.

Another Giants defensive blunder shook the comeback looser. Hunter Pence misplayed Tony Kemp’s flare with a .050 expected batting average into right-center field, allowing the speedy second baseman to hustle into second base. Not nearly as puzzling as Wilmer Flores’ botched double-play that led to a bases-loaded situation the night prior, but puzzling enough. Perhaps it was the strange breeze that carries there, Melvin pondered aloud. Still, check.

Then, Gott pitched around Olson — who’s last seven hits have all been home runs — to put Canha to the plate as the go-ahead run. That never-say-die calm about the A’s just seems to get a little stronger as this strange season progresses.

“That was kind of the mantra in the dugout,” Canha said. “’OK boys, here we go again. We’re in a position to win this thing again.’”

The unlikely comeback followed a promising start for Sean Manaea, who moved up a start day due to Frankie Montas’ lingering upper back tightness.

After a shutout three innings, itlooked like Manaea’s fourth-inning woes would follow him to San Francisco. Austin Slater led off the fourth with a walk and Donovan Solano singled. Mike Yastrzemski tripled and scored on Semien’s error at third base to give the A’s a 3-2 lead. It erased the lead Marcus Semien’s two-run home run afforded them.

But, how Manaea responded was far more telling. After a 1-2-3 fifth inning, Manaea ended up with his best start of the …read more