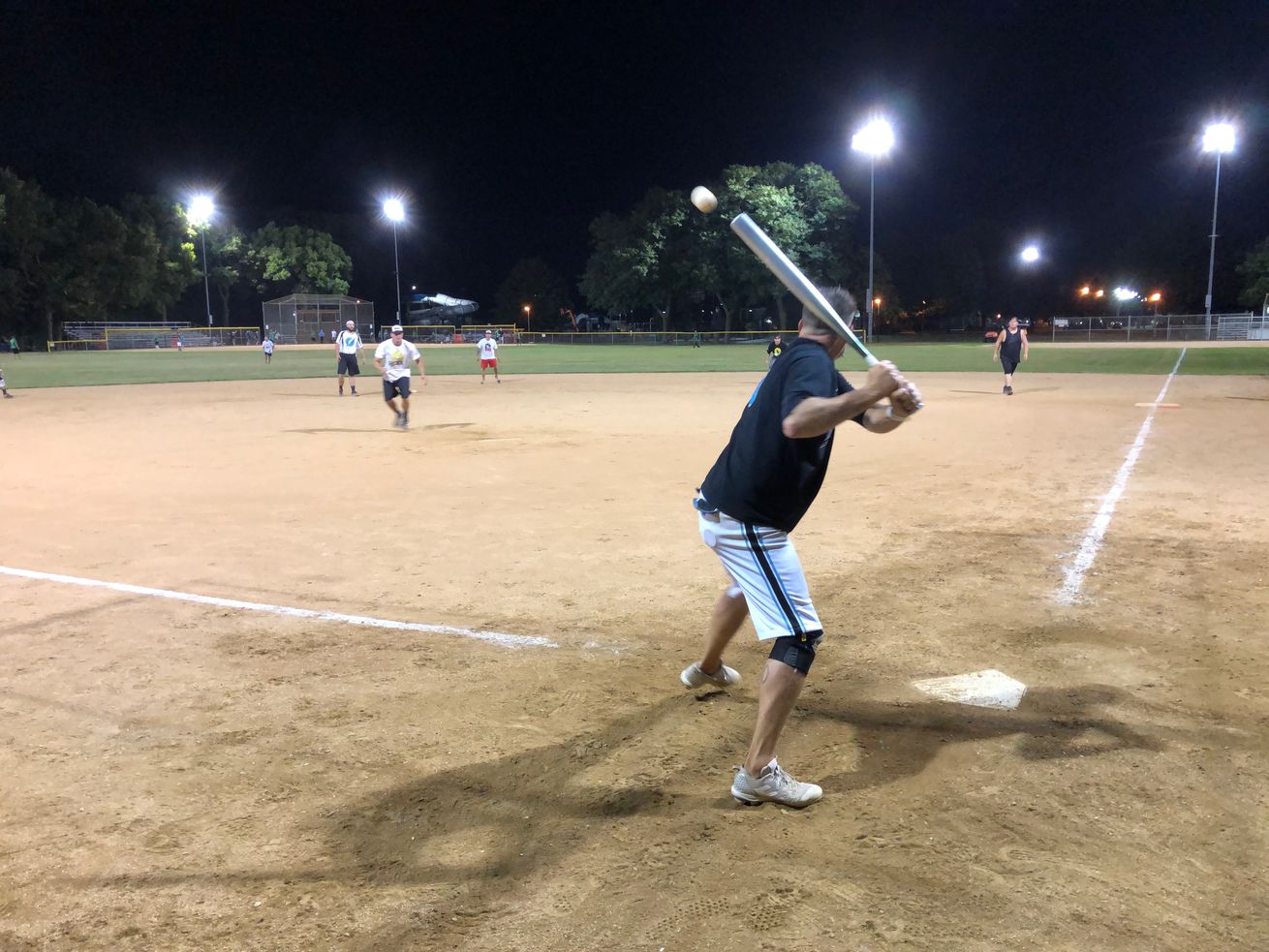 Ralph Lawrence of the Flashback team prepares to swing at a pitch from an opposing Hexx pitcher at an Aug. 12, 2020, game in Forest Park. | George Bliss

With new safety measures in place, softball leagues have been able to adapt without any major issues.

In a city that proudly clutches to the staples of its culture, it’s going to take more than a global pandemic to cancel a 16-inch softball season.

The slow-pitch, gloveless game is synonymous with Chicago — up there in the cultural pantheon with house music, Malört and arguments over which Harold’s is best. And while the coronavirus forced the Chicago Park District to cancel the majority of their leagues, the top teams play on in nearby suburbs.

“It’s difficult, I’m not going to lie, but the people who love the game, we’re figuring it out little by little,” said George Bliss, a lifelong softball player who helps run the 16-inch Softball Hall of Fame. “If we have to play all the way to November or December when it’s snowing, we’re going to do it because we have to make up for lost time.”

The softball leagues operating in suburbs like Forest Park, Schaumburg, Cicero and Melrose Park are looking to the state for guidance as to whether it’s safe to play, Bliss said. Once Illinois entered Phase 4 of its coronavirus reopening plan, which allows for gatherings of 50 people or fewer, it was game on.

Softball, by nature, is more socially distanced than say, football or basketball. Aside from plays at the bases, there isn’t much reason for players to come in close contact with each other.

Still, Bliss said, the local softball leagues are taking precautions to ensure the players’ safety. Dugouts have been fenced off to encourage social distancing, and catchers and umpires are asked to wear face masks, while other players have been instructed not to shake hands or initiate contact at the bases.

These new rules were largely respected at a mid-August game in Forest Park. Fist bumps were more commonly exchanged than high-fives, and instead of sitting in the dugouts, players on the hitting team stood in foul territory on the field.

But old habits die hard, and the coronavirus precautions weren’t totally bulletproof. A few players could be seen spitting the occasional sunflower seed, and some catchers and umpires took the mask requirement more seriously than others.

So far, though, no players have contracted the virus and the season has gone on relatively smoothly, Bliss said, though a few longtime players and coaches decided to opt out of an abundance of caution. In the event that someone did get COVID-19, it would be up to the local league’s park district to decide how to move forward.

The players who have decided to power through with their seasons have noticed a few differences from years prior.

‘Are you a member of the media?’: Leaked USPS memos tell employees not to speak to journalists in order to ‘protect its brand’